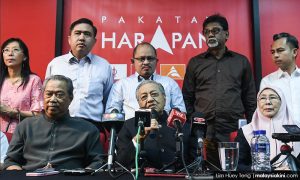 Yin says…News that PH has postponed the launch of its manifesto is welcomed especially if it means that they are tweaking it in response to the public’s reaction to certain issues.

One thing Malaysians want is a new direction not the same old race politics of the past sixty years.  They want an end to racism and a call for national unity.

While transparency, good governance and integrity are important issues, surely they are a given in any good government. But without national unity we will continue to pull in different directions – each community looking after its own narrow interests and the strongest calls the shots. UMNO has been using race to divide and rule for the past sixty years.

I can understand where the pro PHers are coming from. They want a change of government at any cost and nothing must stand in the way of defeating Najib/BN. They see a kleptocratic government, abuse of power, inefficiency and they want to change all that. So do we all. But some of us want Real Change, not tinkering round the edges.

We don’t want a continuation of race politics where one Malay chauvinist tries to outdo the other to win Malay votes. Already Najib in a recent speech (which went viral) has made it clear that Chinese entrepreneurs like Robert Kuok, Genting, YTL, Public Bank (he may as well have added Ananda Krishnan and Tony Fernandez) succeeded ONLY because UMNO allowed them – nothing about their hard work, risk taking, business acumen. It’s all about WE , the Malays, gave you the chance. Not about every citizen having the same rights and opportunities as guaranteed in the 1957 Constitution. This is the warped thinking that race politics produce. Mahathir could not respond because he was the architect of all that.

What happened to ‘Bangsa Malaysia’ or ‘1Malaysia’ which both Mahathir and Najib promised but which we now know is only empty political propaganda.

Those who argue that the country is not ready have not read the mood of the people – even the Malays are calling for an end to ‘crutches’ and the NEP which has benefitted the Malay elite and politicians and UMNOputras disproportionately more than the Malay masses. The wealth gap between the rich and poor Malays is much greater than that between the rich and poor of the other races. Grass-root Malays have been duped by their leaders for decades that it is the Chinese and others who have stolen their wealth and but for UMNO they ‘would be extinct like the Red Indians’ as Mahathir told them; whereas they are the thief.

Instead of abusing young Malaysians (like Maryam Lee and Hafidz Baharom) for their stand, the proPHers should pressure PH to make this small but important change to their stand. Incorporate National Unity as their goal in GE14.

PH can set a new direction for the country where everyone can proudly call themselves Malaysians – not Bumiputras and non-Bumiputras, first class and second class citizens.

A properly thought out strategy where the poor are given a hand up irrespective of race, will direct aid to where it is deserved. The Malays will be the main beneficiary of a colour-blind affirmative action policy. If aid given is means tested (and not skin-colour tested) then the rich Malay elite (who don’t need such help) will no longer be able to siphon off money which is better spent on the poor Malays and the poor of the other races are also helped. Malays are not racists, they just want to be assured they will not lose out in a free-for all.

Mahathir can apologise all he wants for his past misdeeds, but unless he shows it in action, they will just be empty words. Mahathir as chairman of PH should lead the call for National Unity. This will win over the dissenters and those Malays who are fed up with a system which has not done much to lift them out of poverty despite sixty years of UMNO Government.

But will Mahathir do it?