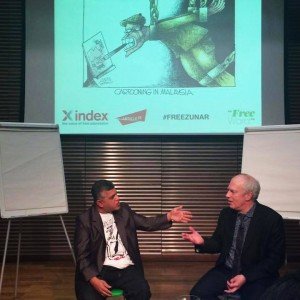 Zunar openly declared his new role as â€˜The Peopleâ€™s Cartoonistâ€™ at an event in London, called ‘Zunar in conversation with Martin Rowson’ on May 14.

Zunar said, â€œWe live in a regime. Although our job is to criticise the government of the day, there is no government in Malaysia. We have been ruled by the same political party for more than 58 years. That is not a government. It is a regime.â€

Both Rowson and Zunar talked about their experiences of drawing in two completely different environments. Rowson acknowledged the enormity of the pressures on Zunar and said, â€œI do not know what I would do if I were in your situation.â€

The situation Rowson referred to is the record-breaking nine charges under the Sedition Act for Zunarâ€™s comments made on Twitter, and if convicted, the possibility of 43 years of imprisonment.

Both cartoonists shoulder heavy responsibilities. Although they criticise their governments, Zunar said that as a Malaysian political satirist, he had the added duty of having to fight for reform.

Political cartoonists draw snap-shots of the main political protagonists and their relationship with one another. So, Zunar would draw judges being manipulated by the prime minister, and the PM, being ‘manipulated’ by the most powerful person in Malaysia, his wife, the self-styled ‘First Lady of Malaysia’ (Flom).

Today, the philosophy behind ‘The Peopleâ€™s Cartoons’ is simple. Anyone who has kept track of Zunarâ€™s work would have noticed that his ‘peopleâ€™s cartoons’ now include images of the suffering of the rakyat. These show the impact of the Malaysian governmentâ€™s policies on the people.

Zunar unveiled the philosophy behind his ‘cartoons for the people’ and said, â€œThe peopleâ€™s cartoons are often accompanied by the inclusion of a ring, or a price tag for hairdressing services, to portray a symbol of wastage and extravagance. They may also include a tweet by the inspector-general of police (IGP), to symbolise oppression and tyranny.â€

He talked about corruption in Malaysia and said, â€œMalaysians think corruption is nothing to do with them, but they are paying for the politiciansâ€™ corruption. My drawings include images of the suffering rakyat. It is all about us.

Zunar knows that drawing the Flomâ€™s face has the ability to launch a thousand invectives, some of which have led to arrest warrants, raids on his office, threats to his staff, confiscation of his books and nine sedition charges.

Zunar attended various freedom of expression forums in London and said, â€œI am being persecuted by the government of Malaysia for drawing cartoons and for making the rakyat laugh at the government. The irony is that I am being prosecuted under the Sedition Act, an old British colonial law, introduced in 1948â€.

Zunar is not just feared by the government of Malaysia, they also hate him. Each cartoon is worth a thousand words and the drawings convey a message in under a minute.

Malaysians are poor readers and would prefer to watch a film, rather than read a book. They would hesitate to read a newspaper report of 1,000 words. Fortunately, Zunarâ€™s cartoon will tell them what they need to know in an instant.

Zunar knows he has the potential to change peopleâ€™s minds and said, â€œI use cartoons for reform. My objective is to instigate change.Â  My cartoons are a tool for a mental revolution, to be used for rebuilding the nation.â€

Zunarâ€™s cartoons have wide universal appeal. They donâ€™t require translation into other languages. They provide light relief from the pressures of daily life.

Zunar encourages Malaysians to reform the government and do whatever they can. â€œEveryone has a part to play. If you can write, write. If you can speak, then speak. If you can blog, blog!â€ he added.

Rowson agreed that the role of the cartoonist was to mock the powerful and those who think they are better than the people. He said, â€œAny politician in England who says, â€˜How dare you draw me, like that!â€™ would receive more ridicule.â€

Zunar said that he was prepared to go to jail for making a stand and said, â€œEven my pen has a stand.

â€œTalent is not a gift. Talent is a responsibility. Talent is God-sent and so, it is important for me, to fight for my people. The trial will expose the cartoon-like nature of the government of Malaysia.â€