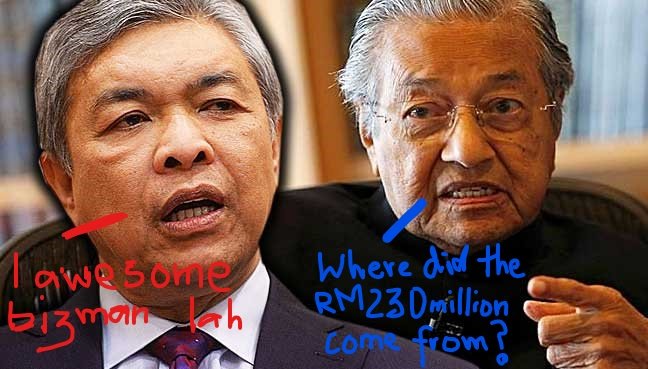 Cast your mind back to 1998, in particular, the 1998 Umno-Baru general assembly.

One of Anwar’s ally was the erstwhile Umno-Baru Youth Chief, Zahid Hamidi, whom it is alleged, was persuaded to bring up the issue of corruption.

In his speech as the Umno-Baru Youth leader, Zahid then raised the issues of nepotism and cronyism, and how Sime Bank almost folded because various people had received loans of RM50 million, RM100 million and RM300 million, without providing any collateral. Zahid wanted Umno-Baru to be rid of this practice.

When pressed by reporters, Zahid declined to name the people who had received these loans and said he had to consult his lawyers first.

After Zahid’s speech, the Raub Umno-Baru division chief, Suhaimi Ibrahim, who was also the Chairman of the Malaysian Youth Council (MBM), requested that Zahid prove he was not involved in nepotism and cronyism.

Instead, Zahid replied that he was an entrepreneur and said, ‘My property is not stolen property, nor was it obtained by deception.  I have declared my assets to the Prime Minister.”

Zahid stressed that he was a successful businessman, and his wealth was not due to privatisation projects, government contracts or his position as the Chairman of Bank Simpanan Nasional (BSN).

He claimed that the assets were purchased when the economy was booming. He then claimed as the economy had slowed down, he was not aware of their value.

A savvy businessman would NOT have bought assets when the economy was at its peak. Smart businessmen would normally “Buy low, sell high”.

In 1996, the 43-year-old Zahid had amassed RM230 million in his bank account. He said that he had voluntarily declared his assets to Mahathir, a month after he became the Umno-Baru Youth leader that year.

Today, Mahathir reminded us of the conversation he had with Zahid then, and alleged that the Umno-Baru Youth leader, had failed to provide a satisfactory account of the source of the RM230 million.

Mahathir said, “When I asked where he (Zahid) obtained the RM230 million in his bank account, his answer was unclear.

“If he can remember, he should explain where such large amount of money came from.” (sic.)

Naturally, Mahathir should have pursued the source of Zahid’s wealth, but today, Zahid and Umno-baru are our biggest and immediate problems.

So, we repeat the question to Zahid, “Where had the RM230 million in his bank account come from?”

We did NOT read reports that Zahid was an exceptional businessman. He was no Richard Branson or Alan Sugar. He is just another Malaysian politician of Indonesian extraction, enjoying close links to Malay triads.