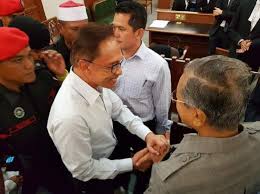 Justice Zulkefli Ahmad Makinudin dismissed Anwar’s application and said, “This is not a fit and proper case for the court to use its inherent jurisdiction.”

If the truth be told, anything involving Anwar will never be “fit and proper”. Not now. Not ever. Never!

Umno-Baru would like you to believe that Anwarâ€™s incarceration was not politically motivated, but there are several signs of this being a political imprisonment.

Dr Mahathir was probably horrified when his successor, Abdullah Ahmad Badawi released Anwar from prison. Najib Abdul Razak was then given the mandate to rule, and replace the recalcitrant Abdullah.

Umno-Baruâ€™s wake-up call, after the 2008 elections, meant that Anwar was a serious threat.

Behind the scenes, the Putrajayaâ€™s battle cry was probably, â€˜Stop Anwar now, because he will stop us from ruling the nation and we will lose our powerâ€™.

Najib and his team lack creativity and drive. Hence, another charge of sodomy was used to trap Anwar.

All Najib had to do was to find a fall guy, and he was lucky. One of his special advisers introduced him to a university drop-out, and a plan was hatched. The rest is history.

One twist in the tale. Mahathir and Anwar, have not exactly kissed-and-made-up, but they are trying to stop Najib from destroying Malaysia.

Second: It takes two to tango.

The complainant Saiful Bukhari Azlan cannot decide if he was voluntarily or forcibly sodomised.

He carried a tube of KY jelly for less painful sex. So why go through the charade of being forcibly sodomised?

If he was a willing partner, why is he not charged as well?

Cases like these dent public confidence in our legal system. It only confirms our suspicions that special laws exist for those who are well connected.

Why do we still retain the archaic provision, under the Penal Code, which criminalises sodomy and oral sex?

We have wasted money and time trying to find Anwar guilty, when there are more pressing issues facing the rakyat.

This archaic law is just another gadget in the Umno-Baru tool box to be used against select individuals as and when required.

Why do you think they did that? Simple…the gomen had to convict Anwar, before he could topple Umno-Baru.

The Kuala Lumpur High Courtâ€™s January 2012 decision had found Anwar innocent of sodomy, but the Court of Appeal overturned this ruling and found Anwar guilty.

Why did the courts bring forward the appeal dates and not allow Anwarâ€™s legal team ample time to prepare its submissions, refuse Karpal Singh an adjournment and not allow him the opportunity to obtain Anwarâ€™s medical report?

Karpal Singh only had seven days to prepare for the appeal.

One is forced to wonder why Karpal Singh died so suddenly.

Sentencing Anwar at a rushed appeal was insufficient. They had to destroy his political future, wear down the opposition coalition and punish them for their audacity. Umno-Baru then called in favours from their sympathisers. Guess who?

PASâ€™ Hadi Awang played his role, albeit crudely. His tactics worked to antagonise the public against Pakatan. Hadi may fear women, but he fears Umno-Baru more.

Anwar brought three divergent parties together to form a credible opposition. When he was jailed, Hadi, whom Najib was courting, simply switched sides from Pakatan to Umno-Baru.

Anwar is symbolic, because he represents the many freedoms which have been stolen by Umno-Baru.

Anwar was detained in a discriminatory manner, in a judiciary process that was unfair and politically motivated.

Anwar’s detention is purely for political reasons because he is the most vocal critic of the governmentâ€™s corruption, human rights abuses and injustice.