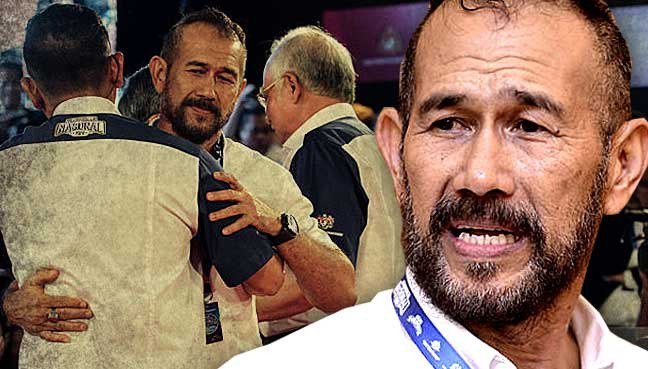 Last night, the actor-comedian Sulaiman Yassin, who goes by the name of Mat Over, gave the worst performance of his life, when he slapped the film director, David Teo in public. The incident was witnessed by the audience at the Transformasi Nasional (TN) 50 dialogue, in which Najib Abdul Razak played host.

Sulaiman claimed that slapping Yeo was not extreme behaviour. He claimed that he wanted to teach Yeo some manners. He said that Yeo had behaved badly and shown disrespect in front of Najib.

The irony is lost on Sulaiman. Slapping someone, whether it is in public or behind closed doors, is not exactly the height of good manners.

Yeo had chastised the moderator for ignoring the people at the back of the hall and also those at the very front of the audience. He claimed that the moderator, the award winning actor, Rosyam Nor, had concentrated on a tiny portion of the audience for fielding questions to the prime minister.

The moderator, too, performed abysmally when he reprimanded Yeo and told him to behave. A decent moderator would not tell off members of the audience but take his comments in his stride. The job of the moderator can be tricky, but it is not his business to be rude.

The limelight is of course, on Mat Over. The bad boy of the entertainment industry who from notoriety has not shot to fame, as the one who defended Najib’s honour.

Someone who is violent in public, and is unafraid to show it, has serious anger management issues. He reveals that he is unable to conduct himself in public and gives an insight into his upbringing.

What the film critic said

A film critic who prefers to remain anonymous, when contacted, said, “Usually, actors who show this extreme behaviour do it for one thing only. Their careers are flagging, few people are signing them on, so they wait for an occaision when they do something extrordinary to gain maximum publicity. Basically, if you ask me, Sulaiman did this to to get attention. Nine times out of them, it is to revive their failing acting career. It is as simple as that.

“Sadly, many actors have egos which they cannot control. They are used to being in the limelight. His 10 seconds of fame, last night, is beamed all over Malaysia and guess what, he is back in the news. It boils down to ego. He feels wanted and much loved now.”

A social observer said, “You could see that Rosyam was peeved but when this apparition suddenly appears from the other side of the central platform, and hurtles towards Yeo, the security men should have sensed that someting was amiss. They should have shot forward to prevent anything untoward. What if the individual, was going to have a go at Najib? They security detail was clearly incompetent.”

“Charges should have been pressed, but the victim has lost our respect for him, when he declind to take this course of action. The incident has now spirally out of control, with the Malay extremists wanting Yeo to be punished.

“This slapping incident has completely overshadowed the event because we cannot find out what the event was about, and more importantly, the question which Yeo had put to Najib is now lost to oblivion.”