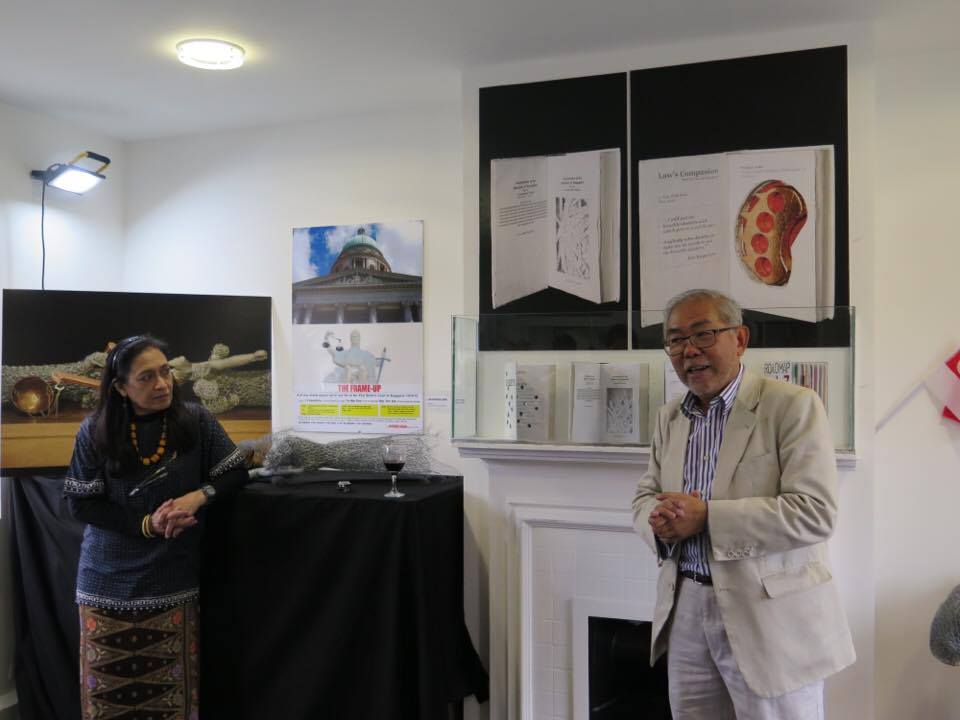 On Saturday, 1 July, the Monsoon Art Gallery opened its doors for a special art exhibition, called “The Other Side of the Moon.” The link to the video is shown below.

It also marked the rebranding of Tan Wah Piow, from student leader, to political dissident, to lawyer and artist.

He first saw Singapore through the eyes of a student leader. He championed democracy and social justice. This was in the 70s. This was Tan Wah Piow, the student leader, who was thrust into the limelight when he took up the cause of a group of workers at the Jurong shipyard.

Arrested and imprisoned, after an unprecedented 47-day trial, in which he represented himself, exasperated the judge who wanted the trial to be done and dusted within a few days, and infuriated the Singapore prime minister, Lee Kuan Yew (LKY), Tan was later forced to flee Singapore, soon after his release from jail. His eventual exile and political asylum in England, prompted him to observe and criticise LKY’s rule from afar.

LKY was furious that Tan had made a mockery of the law in Singapore. Outraged that his men had failed to recapture Tan and put him behind bars again. LKY could only fume when Tan read law at Balliol College, Oxford, and rebranded himself as a lawyer. In the sedate grounds of the university, Tan vowed that his citizenship would one day be restored. Back home, detention without trial was the order of the day.

Fast forward to 2017, LKY is gone, his legacy is in tatters with his children airing their dirty linen in public. Tan was aware that some Singaporeans were busy making preparations to commemorate the 30th anniversary of “Operation Spectrum”, a black day in Singapore’s history, when on 21 May 1987, under the draconian Internal Security Act, (ISA),  sixteen people were arrested in the first wave, to be followed by the arrest of another six people. The men and women were mainly professionals, such as lawyers, reporters, community, church workers and entrepreneurs. LKY’ had alleged that they were part of a marxist plot to overthrow his government.

Whilst some Singaporeans remembered Operation Spectrum’s 30th anniversary with a book launch and talks, as well as a call for the ISA to be abolished, back in the tranquil gardens of Tan’s residence, in a leafy suburb of London, a new chapter in Tan’s life was about to be unveiled.

At the exhibition in the Monsoon Gallery, we witnessed the emergence of “Tan, the political artist”. His works were a mix of installation art and images, which he had carefully built over several months, to address sensitive issues like the cronyism of the Singapore government, injustice, oppression, violence, injustice, inequalities and the neglect of human rights. 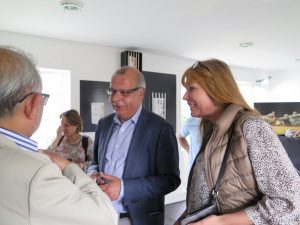 He switches genres and mediums, from posters and portraits to abstract works and sculpture. He allows politics to flow naturally from his mind’s eye.

Dotted around the gallery are the “broken scales of justice”, the “bullet riddled book of law”, the hidden knuckle dusters in the page marked, The Law Companion. The caption, one of LKY’s favourite sayings reads, “…my posture, my response has been such that nobody doubts that if you take me on, I will put on knuckle-dusters and catch you in a cul de sac…Anybody who decides to take me on needs to put on knuckle dusters. If you think you can hurt me more than I can hurt you, try…”

In another corner of the room, the presidential chair lies surrounded by several dice, all of their faces are fives. It screams out the sudden urgency, in 2017, for Singapore to have a Malay president.

White, the colour of the PAP is prominent. The whitewashed pin-stripe trousers, the white shoes, the white spectacles; all reminders of the whitewashing of Singaporean political life. Other guest were fixated by the hangman’s nooses, made up of lawyer’s red tape.

A selection of bottled, coloured waters, typifies the evolution of the LKY brand, from rebranding, to disbanding. 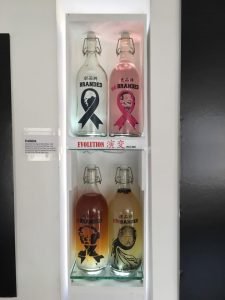 A larger-than-clenched fist, made up of chicken wire, is marked “work in progress”.

The lawyer’s hands show that his once smooth, delicate fingers are now rough, scuffed and covered with cuts, bruises and paint. It is, Tan says, a small price to pay for his open criticism of the Singapore government. He knows that he speaks and acts for many.

Tan’s exhibition is open for viewing, by appointment (please contact mbc@monsoonsbookclub.com). Viewers are warned that the exhibits they confront, may conjure up feelings that they have not been allowed to express, in public, in Singapore.

From protests, to the power of the word, to political art. That is the rebranding of the political dissident, Tan Wah Piow.