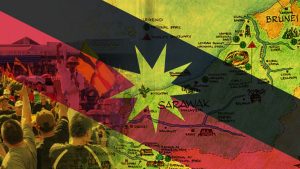 Sadly,Â  the people of Malaya are held to ransom by their cousins in Sarawak.

Everyone knows that the Sarawak people hold their own destiny in their hands.

But few know that the Sarawakians can help free the Malayans from the tyranny of the Umno-Baru rule in Malaya.

Orang semenanjung cannot get rid of Umno-Bare without your help.

Sarawak is BN’s safe deposit. It is hard to tell the Sarawak people not to vote BN, especially when goodies and handouts rain from the sky, once every five years, before a state and general election, or a snap election.

If you vote BN, ask yourself, “Why has all the oil and timber money gone all these years? Why do Sarawakians only get 5% oil royalty? From this 5%, how much goes to the Sarawak people?

Sarawak is rich but Sarawakians are the second poorest Malaysians.

Sarawak is blessed with natural resources like oil and gas reserves, and timber. The people SHOULD be enjoying good education, health care, transport links and a good standard of living.

Why are Sarawakians the second poorest people in Malaysia? Where does the money go?

Sarawak, Sabah, and Malaya formed Malaysia. Why are Sarawak and Sabah treated as states, and not on equal terms with Malaya? Sabah and Sarawak are being bullied and robbed, through Putrajaya’s abuse of power.

Sarawak exports billions of ringgits of hydrocarbons. Why is only 5% of the oil royalty given to Sarawak?

Sarawakians need a two-thirds majority in Parliament to amend the Petroleum Act 1974, to enjoy a greater percentage of oil royalty. What is stopping Putrajaya amending this Act, despite BN being the ruling party?

The North-South Expressway in Malaya connects Perlis to Johore. Malayans enjoy good infrastructure and easier development. There have been many delays in the Pan-Borneo Highway. Its construction is like a never ending saga.

Adenan Satem, the Sarawak chief minister, is confident that BN is good for Sarawak. So, why is he banning Opposition politicians from entering Sarawak? His actions show that he is desperate.

Adenan warned the Opposition to keep 1MDB out of the Sarawak campaign ceramahs, but he forgot to tell the BN candidate for Dudong, Tiong Thai King.Â  Why did Tiong mention the 1MDB saga and blame the Opposition, for not monitoring the government? If Tiong is so smart, why did he not advise his own BN leaders to tell the truth, for once?

The Nangka BN representative, Dr Annuar Rapaee’s speech in Sibu, was littered with references to Islam? His ceramahÂ  sounded like a semenanjung Umno-Baru ceramah. He did a U-turn when he was exposed.

Cronies will be “awarded” multi-million ringgit contracts. They enjoy immense wealth and unlimited power. Do you think the ordinary Sarawak person, enjoys the same privileges?

If you are not convinced about the Opposition, visit Penang and Selangor, to open your eyes. These two states have achieved much, despite having no oil or timber reserves.

If you wait too long, before you vote for change, there may not be much to leave your children.