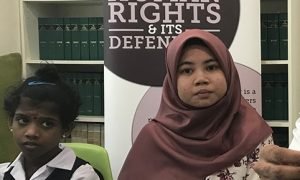 All around her, excited schoolgirls were shedding tears of joy, or expressing sighs of relief after completing another hurdle in their school life; but 20-year-old Roisah Abdullah could only watch in stunned and shocked silence.

The reason for her schoolmates’ jubilation was the announcement of the STPM results. Those who passed were euphoric. The more academic ones were already making plans to pursue their courses at university or college. Others were content to enter the job market and start earning a living.

Roisah was happy for her friends, but her success as the top scorer in her school with 3As and 1B did nothing to lift her spirits. Her future looks bleak, because she is a stateless person, and she is ineligible for any opportunities in further education, nor could she gain employment, legally.

Her birth certificate states that she was delivered to a foreign mother, at a clinic in Klang. There are no details of her Malaysian father. She was soon adopted by a Malay family and raised in Malaysia.

Her adoptive family said that she has showed great promise as a student. She scored straight As in her PMR, and 7As and 1B in the SPM examination. She considers herself lucky because she was eventually allowed to sit for these papers after writing many requests.

Roisah was not able to replicate this success, when she applied for citizenship, with the National Registration Department (NRD). Her many requests were rejected, and the last one was in March 2013. The authorities took five years to respond, and only informed her that she had been denied citizenship, on 16 January 2018.

The Padang Serai MP, N Surendran, took-up her case, and held a press conference in Petaling Jaya, to highlight Roisah’s plight and her inability to apply to universities.

He praised her scholastic achievements as her school’s top scorer, this year, but he was furious that she had no future, as she had been unlawfully and wrongfully denied citizenship. 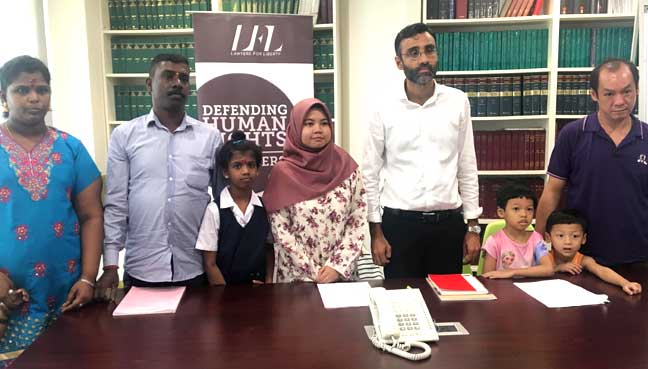 How many Roisahs are there?

How many Roisahs are there in Malaysia, who have slipped through the net, and are penalised, through no fault of their own?

The PKR MP cited a similar case of eight-year-old Karthiyani Ragunathan, who was born to Malaysian parents.

Her mother elected to have a home birth, unlike her other 10 children. The authorities claimed that they did not know where Karthiyani had come from, because her mother did not deliver her in hospital. Using this information, they denied Karthiyani citizenship. Like Roisah, Karthiyani’s application for citizenship, in December 2017, was rejected.

The authorities refused to acknowledge a letter from the Hospital Kuala Lumpur (HKL) which confirmed that she had been born at home.

Incidentally, many of our mothers and grandmothers, especially those who are now in their 70s and 80s, were born at home, with the help of the bidan kampung (village midwife). They were not refused citizenship.

Karthiyani is desperate to go to school and is a sorry sight as she goes around wearing a school uniform.

Another, in similar circumstances is seven-year-old Lim Ai Ling, whom Surendran said had an Indonesian mother and a Malaysian father. She was born in a clinic in Klang and her application had been rejected, because her parents’ marriage was not properly registered. Her mother has since returned to Indonesia.

Why is Zahid dragging his feet?

Why are the authorities dragging their feet in resolving the citizenship requests of these three children? How many others are there?

Roisah dreams of being an accountant or an economist. Both Ai Ling and Karthiyani would just love to be like their friends and attend school. All of them have been denied a future, despite being born on Malaysian soil, to at least one Malaysian parent.

Under the Federal Constitution, these three children should have been granted citizenship, automatically.

Why is the Home Minister, Zahid Hamidi so callous and unconcerned about resolving their cases?