The thug who attacked the Nepali security guard in the video below, and struck him with a golf club, must be severely punished and face the full force of the law.

Some Malaysians are very selfish. Perhaps, they are too stupid to realise that an OKU (Orang Kurang Upaya – disabled) bay or parking spot,  is meant for disabled car users.

In some countries, parking in an OKU spot, is an offence which results in a fixed penalty notice (FPN), in others words, a fine. 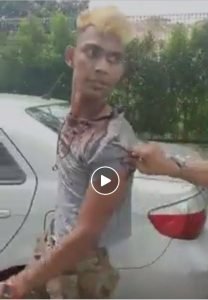 The PDRM is to be praised for arresting a 24-year-old man from Terengganu, for assaulting a Nepali security guard with a golf club.

The guard had clamped his car for parking in an OKU parking bay at Traders Square in Wangsa Maju, Kuala Lumpur..

Whilst on his rounds, the Nepali guard noticed a Honda Jazz parked in the OKU bay and so he clamped the wheels of the car.

When the car owner and his friend returned to their car, 30 minutes later, they demanded that the Nepali security guard remove the clamp, but he told them that they had to settle the fine, at the office, before he would remove the clamp.

The guard was merely doing his job, but the two men, would have none of it.

Furious at their request being denied, they decided to remove the clamp themselves, but was told off by the guard to stop vandalising the device. 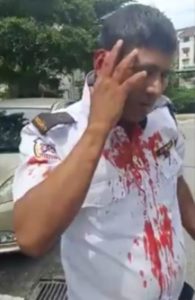 At this juncture, one of the suspects scolded the guard, punched his face and took a golf club from the boot of the car, to strike the guard on his head, face and arms. The guard was injured on his right arm and ear, had to seek treatment at the Kuala Lumpur Hospital.
The Wangsa Maju police chief, Rajab Ahad Ismail, said that the suspect, who was later arrested,  is a previous drug user.
According to this site, “Police have yet to disclose the suspect’s name, but have confirmed that he has a previous drug record.The case is being investigated for causing hurt by dangerous weapons under Section 324 of the Penal Code.” 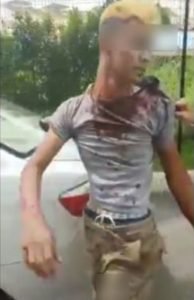