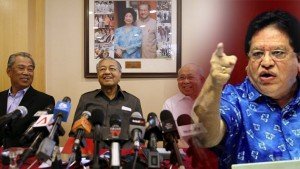 When your good friend confides in you and says, “Don’t worry. I can keep your secret,” alarm bells should start ringing in your head….

What she meant is, “OMG……just wait till I tell (substitute her best friend’s name here)!!”

A few days ago, the SpeakerÂ  of the Malaysian parliament said, “Pua must either quit the Public Accounts Committee (PAC) or abstain from the 1MDB investigation, if he wants to debate Arul Kanda.”

The Speaker claimed that he wanted to uphold the PAC’s integrity and to avoid the ongoing probe into 1MDB from being derailed.

What the Speaker meant was, “I don’t want to upset my boss-lah!”

A pro-Umno portal and a staunch supporter of Najib Abdul Razak expressed concern that the Youth and Sports minister, Khairy, had actedÂ  just like former PM Mahathir Mohamad and the Opposition, in voting down Budget 2016, to express no-confidence in Najib.

The website wrote, “The way Khairy talks is as if Najib just entered politics a month ago. Does Khairy realise that Najib was an MP even before he (Khairy) was two months old.” (Note: The Malaysiakini title for the article says it all: Najib was MP when you were in diapers, KJ told)

What the pro-Umno portal meant was, “He (Khairy) still behaves like a two month old.”

So, if you want a grounding in Umno-Baru spin, and have a fair grasp of Malaysian politics, do read the full article here:
http://theantdaily.com/main/Interpreting-the-Umno-Baru-spin-what-they-really-mean