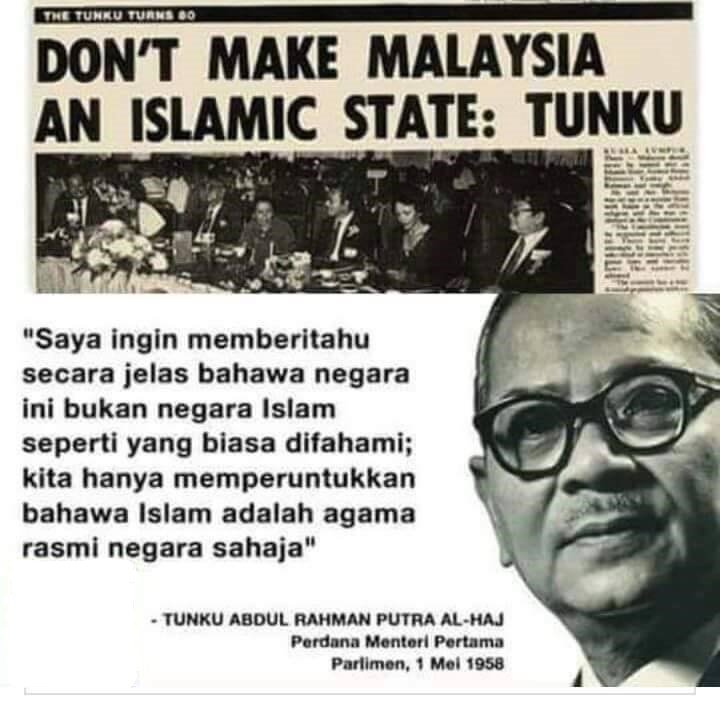 Let us imagine a “Ketuanan Melayu Utopia” with 100 percent Malay bumiputera equity, with all the Chinese “banished” to China and the Indians to India.

The Lifestyle changes under Ketuanan Melayu

Schools: Girls will be excluded from many lessons. They will be taught needlework and domestic science. Shortage of school spaces will be a thing of the past, when girls are barred from school altogether.

English: Why bother with English? Arabic is the new English. Why should Malays show off their fluency in English and be teased for being Mat-Salleh?

If you don’t know any Arabic, chanting some Koranic phrases will make you sound learned. Few people will know what you mean anyway.

Music: Music is  anathema to Muslim teachings, and only nasyid songs are allowed. Non-Malay children, who appreciate music and want to learn a musical instrument should limit their skills to playing the kompang.

Universities: With universities attended and staffed by Malays only, standards will undoubtedly rise when the Malays compete to see who is more Islamic among them.

Women need not bother being academic, smart or workaholics. They are destined for hell anyway.

Extracurricular activities: Boy-scouts and girl-guides groups will cease to exist. Girls are banned from sports, because of the dress code and too much “kangkang-kiap” (too much gyrating and doing splits, to show off one’s crotch).

Babies: There will be no more Gregorian New Year and the ban on Valentine’s day celebrations, means that abandoned babies will be a thing of the past.

Married life: There will be open season on polygamy because men will be able to marry whenever and whoever they like.

Wives will learn to shut-up or put-up with their errant husband’s behaviour.

The husband’s warning rings in their ears, “Do you want me to divorce you and throw you out?”

Syariah laws. A man can opt to marry girls as soon as they reach the age of puberty. He can get around the laws prohibiting sex with a minor, by marrying in another state.

He feels confident, because syariah laws, which are supposedly to protect women, from philanderers like him, are hardly enforced.

When he tires of her, he has the option of a second, third or fourth wife.

The Malay man is king. Just like cash is king.

Fathers: The errant father need not worry about his children’s welfare, or breakdown of the family-unit. Syariah courts rarely enforce maintenance payments. This means he can breed like rats, because who cares?

Social ills: Places that used to sell alcohol, and massage parlours, nightclubs or karaoke bars, will cease to exist. “Social ills” will disappear.

The Malay man who cannot get his sexual thrills through the “normal outlets” will have to be content rubbing himself against another woman, as some vile Arabs do to unsuspecting women, on the crowded haj, in Mecca.

Food: JAKIM will continue to ensure all food does not contain traces of porcine DNA. They are very serious about their work, and will look for pork DNA, even if the product is bottled mineral water.

National budget: The allocation for sport is reduced and the money poured into JAKIM instead. The head of JAKIM needs his super fast cars, a different one for each day of the week, to whizz around and check that entertainment outlets are not selling alcohol and that his moral police force are busy spying on couples in budget hotels.

Unemployment: With all Malays exhibiting good behaviour, the moral police force is downsized, and unemployment will rise.

Lift to heaven: In the Malay Utopia, the Malays are fully Arabicised and need not worry about their Malay heritage, which is based mainly on Hinduism and animism.

Everyone wants to go to syurga (heaven),  and being more Arab will be like going up (to syurga), by lift, instead of taking the stairs.

Malay dress codes These will cease to exist. The kebaya is already usurped by the jubah. Tudung or mini- telekung have replaced the selendang. Malay men parade in white Arab robes, because putting on a shirt and trousers takes too long. Far easier to slip over the pyjama like garment over one’s head.

The Perak mufti is against football jerseys, so teams play in their robes. The game is more funny than a comedy show….but we need this spectacle, of people tripping over their robes, because life in the Malay Utopia is depressing.

Architecture: Instead of making homes which are suited to our tropical climate, we build more Arab like homes, with small windows to keep out the intense Saudi sun and the non-existent Saudi desert sand.

At least we won’t become hitam (tanned) and can save on money on sauna treatments, because the cooped up home, will feel like a sauna.

Malay weddings are just a vulgar display of wealth. As people have forgotten how to relax and have fun, JAKIM having banned the joget and mingling, guests just “eat, then go home”.

At least the happy couple can go to bed early!

It is against Islamic principles to sing hymns, worship the dead and and salute a monument.