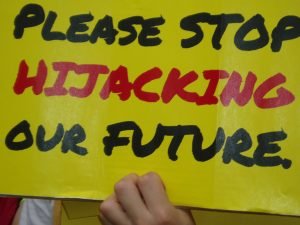 You are undecided. You want to join the Bersih 4 march on 29th and 30th August, but you are afraid. Afraid of being tear-gassed. Afraid of being blasted off your feet, by a jet blast of chemically-laced water. Afraid of being beaten up by rogue policemen. Afraid of agent provocateurs, within the largely peaceful crowd of genuine Bersih supporters.

You know your prime minister has not satisfactorily answered the many questions posed by the people from his own benches, the Opposition politicians and the voices of civil society. Most damning of all, was that he did not answer your questions.

You want the truth about “1MDB”. Corruption is like a cancer in Malaysia, and yet, no one appears to be excising it from public life.

You want to know the spin regarding the RM2.6 billion donation. Why did this money become a donation, only when the world, heard about it?

You want to know why our currency is plunging so fast, that you wonder if you can sustain the fees and living expenses of your child, who is studying overseas?

You recall the reasons for sending him away, to study. His grades were among the top of the country, but he was rejected. Your friend who works in the Education department, said that his place was taken by a well-connected, local politician’s son.

You want to know if you and your family can survive the worsening economic crisis. If you must tighten your belts further, you despair, because you are already struggling.

You know that your mother depends on you for financial help, because your dead father’s pension is insufficient. She is sick, and needs home help, which is expensive. She may have to sell up and come and live with you, in the city, away from her friends, and familiar surroundings.

You want to know why there is rampant crime, and wonder about police priorities, with 126,000 police personnel, seconded to tweet duty. Mat Rempits race in the early hours of the morning, and cause havoc in your neighbourhood. Policemen have not come to investigate crime in your area for several years.. If the Mat Rempits find out that you reported them, they will key your car. It happened to one of your neighbours, and he has since migrated.

You know that the senior executive, who complained about political interference in your company, had his contract terminated, without notice. People in your company appear to work out of fear. There is no passion in their work, and little joy in completing their tasks. The atmosphere is toxic, and people mistrust one another. How different it was, in your youth, when senior executives appeared to be of a different breed, with different moral values.

Your mind is made up. You are joining the Bersih 4 rally. Not just that, but you will bring along a few friends to the rally. You know that the price of apathy is costly, because it was your parents’ generation’s  apathy, which led to the current Malaysian crisis.