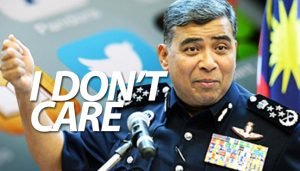 The Malaysian IGP, Khalid Abu Bakar is a disgrace to his profession. He practises double standards.

Protecting the public is the IGP’s duty, so he deployed his men, to protect the offices of Malaysiakini against the Umno-Baru rent-a-mob thugs, dubbed the Red Shirts.  The Red Shirts are gangsters, led by an Umno-Baru division leader, called Jamal Yunos.

But why was Jamal not picked up for contravening the terms of the Peaceful Assembly Act? It is highly unlikely that Jamal gave the police a 10-day warning, to protest outside the Malaysiakini office, or as the Red Shirts said, to “tear down the walls of Malaysiakini”.

When Jamal threatened an all-out-war on Bersih, his aim was to scare people and stop them from taking part in the 19 November Bersih 5 march.
Jamal threatened bloodshed, but the IGP did not arrest him.
The people are fed-up with corruption, Ketuanan Melayu, abuse of power, cronyism, nepotism and injustice. On top of all that, are the various government backed people, like state muftis and mullahs, spreading religious hatred to divide the rakyat.

What is the source of Jamal Yunos’ funding ?

The Red Shirts demanded that an investigation be made into Malaysiakini’s source of funding.
Would Jamal care to tell us where he obtains his funding for his rent-a-mob?
He can afford to pay each branch chief RM1,000 because the jolly in Dubai, which he promised three months earlier, had to be cancelled.
Malaysiakini is in the business of providing news to the public.
Jamal’s Red Shirts exist to spread chaos, destruction and to distract the rakyat, when Najib Abdul Razak’s government has something bad to hide.

The IGP is quick to take action against Malaysiakini, but in his own back yard, he cannot see the fat-boy, Jho Low, the mummy’s boy, Riza Aziz and MO1. All of whom have been implicated in the American Department of Justice‘s investigations into 1MDB.

The Arab prince’s donation of RM2.6 billion to Najib, was used to influence the results of GE-13. This is an act of treason.

After being exposed, Amar claimed that he was merely highlighting the possibility of bombings by â€œother participantsâ€, whom he failed to name. Oh dear! Selective memory loss?

In all cases, there has been no outcome into the investigations of plots to overthrow the government.

When he was Selangor police chief, Khalid Abu Bakar, trashed the PDRMâ€™s reputation with his mishandling of the death of A. Kugan in police custody, and the shooting of Shah Alam teenager, Aminulrashyid Amzah.

A few weeks ago, the IGP ordered a travel ban on Zunar. Travel bans should be the prerogative of the Director General of the Immigration Department.

The IGP is a disgrace to his profession.

Sometimes,  the joint police and Umno-Baru charades are staged, simply to manipulate the rakyat.

The IGP has a blind spot for anything which Najib, his kin, his mates, Umno-Baru and the bigots do, in Malaysia.

Khalid has poor leadership skills, takes complaints personally, and is incompetent. He is not worthy of a public post. His actions have damaged public trust and undermined police integrity. He must resign.
Rebuilding Malaysia