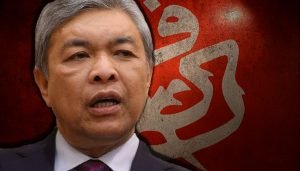 Last week, Berita Harian quoted Zahid saying â€œUmno is not as dirty as perceived by unethical journalists.â€ We did not say it, he did!

Admitting Â that Umno-Baru is dirty, is like telling us something we already know. It is not good enough.

He should have explained how he intends to clean up the party instead of gabbing on about online journalists spreading “baseless allegations” about Umno-Baru.

Cleaning-up a political party is not like picking-up a biscuit, which has dropped to the floor and blowing onto it, to kill the germs. Cleaning-up Umno-Baru is not as simple as using anti-bacterial wipes. The process involves deep, invasive surgery. Probably needs a heart, head and liver transplant.

There is so much dirt within Umno-Baru that Zahid will have a hard time trying to convince us that the party is not terrible.

So how dirty is Umno-Baru?

1.Najib Abdul Razak initially denied any knowledge of the RM2.6 billion and when pressed, claimed that he thought it was aÂ donation from a Saudi Arabian prince. Then, whenÂ Sarawak Report started publishing further material about the 1MDB scandal, Najib changed his tune and said the money was actually an investment, then it was to help overcome islamic extremism in Sarawak, in GE-13.

There have been so many changes to his story, that it is difficult to keep track of his lines.

2. Najib claimed that he was not aware that several hundred million ringgits had been deposited in his personal bank account.

For a PM, on a meagre RM23,000 monthly wage, to not recognise this hefty multi-million ringgit deposit in his personal account is shocking.

3. Najib is also Malaysia’s Minister of Finance. If he cannot even keep track of his own bank account,Â  why should Malaysians place any trust in him, to manage the nation’s finances?

Zahid’s incredible feat of pulling numbers out of thin air is another Umno-Baru miracle. When he claimed that 87% of the information derived from online writers was incorrect, how had he come-up with this absolute figure?

He quoted the figure with utmost confidence and finality. Perhaps, he could share with us, the formula he used, to end-up with a figure of 87%. It was not 90% or 80%, but a definite 87%. It would also be nice to know if his formula included a margin of error.

Zahid: “Leave, if you are unhappy”

Soon after GE-13, when he was appointed the deputy PM, he told Opposition politicians and disgruntled Malaysians to leave the country, if they were unhappy with the electoral system.

He has failed to apologise for this insulting remark.

We elect our politicians, and we expect them to perform, and not lord it over us.

Why are senior politicians fraternising with crooks and the criminal underworld? In October 2013, at an event in Malacca, Zahid told the audience that the Malay gang, Tiga Line were his friends.

How confident does that make the rakyat?

Zahid was quoted in various newspapers, saying that the police will shoot Malay criminal gangs photos first, and ask questions later. He then claimed that he had been misquoted, but this is standard Umno-Baru procedure, to back-pedal when the rakyat has been outraged by their statements.

Politicians have been caught with their fingers in the kitty, but life goes on as normal.

So, how dirty is Umno-Baru?

It is a RM6 billion question!