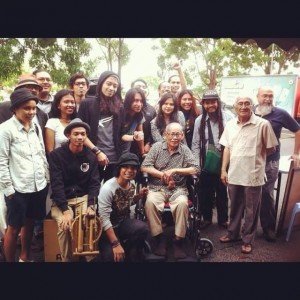 Two Malays, one 87-years-old, the other is 53. Their birthdays are within days of one another. Both are Taureans and both live by the pen. You know Zunar, Malaysiaâ€™s satirical cartoonist, who was recently given a platform at the United Nations in Geneva to make everyone aware how the culture of fear, imposed by Umno-Baru, strikes at the rakyat.

Very few Malaysians will have heard of Said Zahari, the veteran journalist, who was once the chief editor of Utusan Melayu, the first Malay owned newspaper, started by Yusuf Ishak. Yusuf later became the first President of Singapore.

Singaporean born Said Zahari wanted to become a teacher, but World War Two intervened. He was educated in an Anglo Chinese School in both English and Malay. He was also fluent in Mandarin and learnt Japanese during the war.

From an early age, Zunar was schooled in a village in Kedah, proved that he had a talent for drawing, but as was common in his time, his parents â€œpersuadedâ€ him to enter the science stream.

He became a chemist, but Kuala Lumpur, where he worked, provided the opportunity for him to observe first-hand, the inequalities of life. He stopped drawing for a while, but the injustice meted out against Anwar Ibrahim, motivated him to pick up his pen, again. He has not stopped drawing.

Said Zahari was a journalist who admired Samad Ismail, for his stance against colonialism (British). During WWII, Said Zahari received first-hand experience of the Japanese Occupation and this strengthened his resolve against any forms of imperialism. The irony is that later on, the paper he would helm, fell under the dictatorship of another â€œimperialistâ€ master â€“ Umno.

Both Said Zahari and Zunar perform necessary roles in society. Both criticise the government of the day, for their excesses. Both champion the needs and aspirations of the common man. Both are prepared to make a stand and both are prepared to accept the consequences.

Zunar is being hounded by the IGP, Khalid Abu Bakar, and a slew of charges have been leveled at him. Zunar faces nine charges of sedition and may possibly be jailed for 43 years.

Five decades ago, Said Zahari incurred the wrath of the Umno party which wanted to dictate terms to the paper. As the chief editor of Utusan Melayu, Said Zahari was jailed under the ISA for 17 years, in â€œOperation ColdStoreâ€. Lee said it was at the request of Malaya, but there was possibly collusion between Malaya and Singapore.

Few would believe that Utusan Melayu, started in 1939, was an independent paper, which voiced the aspirations and concerns of the ordinary Malays of the newly independent Malaya and Singapore. Today, it is the mouthpiece of Umno-Baru.

By 1961, men loyal to Umno had infiltrated the paperâ€™s board of directors. Umno subsequently demanded that the editorial of Utusan Melayu accede to their four demands.

Said Zahari, the chief editor, was shocked by the arrogance of Umno and refused the take-over and fought fiercely for the paperâ€™s independence. He successfully launched a strike to defend press freedom.

The 100-day strike was only broken when Said Zahari went to visit the Singapore offices and was refused entry into Malaya. Then, agents provocateur were sent to intimidate the people who were striking.

Zunar may not have led any strikes, because he is not on the staff of a newspaper, but he has refused all awards and financial rewards, offered by the Umno-Baru government. He is aware that these will be used to tarnish his reputation.

Said Zahari was against an Umno takeover of Utusan. Zunar is against the takeover of Malaysian minds, by Umno-Baruâ€™s culture of fear and division.

For writing critical editorials, blasting the European countries which colonised parts of Africa, and treated their citizens despicably, Said Zahari incurred the wrath of Umno. He was also in trouble with the Alliance government (precursor of BN) because his paper championed the concerns of the people. They often demanded an apology from Said Zahari, which he refused to give.

Zunar has openly admitted that he criticises the people who control the purse strings of the nation, the PM and the self-styled â€œFirst Lady of Malaysiaâ€ (FLOM). Zunar has been arrested, his offices raided, his books confiscated and he has been hauled to prison.

In 1961, Said Zahari did not get any support from the international press, which was aware of what was happening, but for one reason or another stayed silent. Today, with the internet and social media, Zunarâ€™s plight is publicised by the foreign media and spread worldwide.

The moral of the story, is that Utusan Melayu was once a firm fearless, voice of the people and a champion of the oppressed. The man who fought so hard for an independent media was jailed for 17 years. He is Said Zahari, a courageous Singaporean Malay who was prepared to make many personal sacrifices to make a stand, so that the ordinary man could have a voice. He was betrayed and punished by Umno.

Today, the modern-day Malaysian who is prepared to fight to the bitter end, so that we may enjoy our various freedoms, is Zunar. He continues the good work which Said Zahari left unfinished.

The freedom of expression is one freedom which we must continue to uphold. Let us help Zunar fight the good fight. Let us praise Said Zahari for showing us the meaning of being principled and writing without fear or favour.