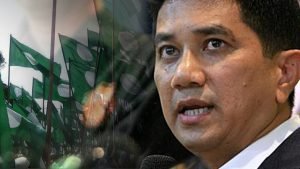 Azmin Ali is either overworked and suffering the strain of an unfruitful journey to Borneo, or he is suffering an onset of mild dementia.

Soon after the results of the Sarawak state election were announced, he called upon PAS, to rejoin PKR and DAP and team up with the PAS splinter group, Amanah (Parti Amanah Negara), to fight against Umno-Baru, as a united front in GE14. Is Azmin serious about the invitation to PAS?

There is no point in mentioning the BN coalition because the other component parties only exist in name. They merely pop-up in the news, at critical points in Malaysian politics. For example, MIC squabbles over issues which children in the playground find contemptible, the MCA regurgitates hudud, to distract the Malaysian rakyat, presumably to keep them from focussing on whatever catastrophe the government has created.

Malaysian politics is a farce because no one discusses real issues or policies. We are reduced to bear-baiting, trading insults and claiming that “mine is bigger than yours”.

Azmin did not learn his lesson.

When Azmin said that the Sarawak results had shown that “the people rejected the squabbling among the opposition parties”, he has not learnt his lesson from past elections.

The component parties of the Opposition have squabbled before. It is not a new phenomenon.

As PKR deputy president, and the MB of Selangor, did it behove him to whip his party members into order, and liaise effectively with the DAP?

The public bickering suggests that none of this occurred.

The worst news that the rakyat would like to hear is Azmin’s suggestion that PAS rejoin the coalition.

With Hadi Awang at PAS’ helm, and the conservatives ruling the roost, anyone who teams up with PAS is sure to commit political suicide.

Hadi once encouraged the government to utilise the services of the thousands of Islamic scholars in Malaysia, and said, â€œThe colonial era is no more. We govern on our own. There are after all, many learned ulama and ustaz here.”

We know that the ulama are the tools of the government, and are used to divide the nation.

Wayang kulit is banned. Malay women’s clothing is closely scrutinised. Playing stringed musical instruments, gymnastics, ballet, and criticising leaders are all forbidden. Child marriages are commonplace. Flooding is blamed on God’s wrath, because Kelantan does not have hudud. The numbers of drug addicts, incest, and sufferers of HIV/AIDS are increasing. Kelantan has serious socio-economic problems.

Hadi is a misogynist and prefers women to be stay-at-home mums, taking care of the household.

Hadi used to avoid attending critical meetings with other Opposition leaders, because he claimed to be too busy, or he was exercising his right to refuse to attend, or his aides would make the excuse that he was very ill.

He could not be bothered to attend, unless it served his interests.

Najib and Hadi have an affinity for one another. The discussed the formation of a unity government. When one party said that they had secret discussions, the other party denies it. They play a dangerous game of confusing the public.

Hadi was the destroyer of Pakatan Rakyat.

So why is Azmin entertaining thoughts of inviting PAS, he may be the one who hammers the last nail into Pakatan Rakyat’s coffin.

Is Azmin the Trojan horse that has been delivered to Pakatan?

It is time for PKR to prune the dead wood, the Fifth columnists and the traitors from their ranks. They only have two years to build an effective force for GE14.