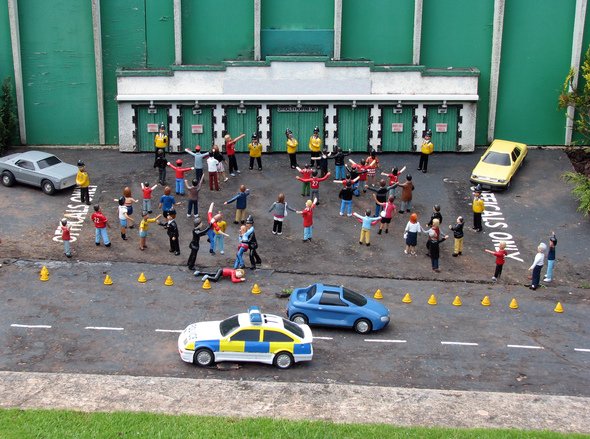 The article below was written in the days after Umno-Baru Youth stormed the DAP headquarters in KL, just over a year ago. I repost it again today, in the aftermath of the Low Yat incident. the Low Yat incident is a shameful blot on our history. and where do I put the blame? On Umno-Baru and the police.

Umno-Baru instigates violence. Their ministers say CHinese this and that (eg cheat retailers), and no action is taken against theses politicians. What lah!!!

The police arrive late (at Low Yat) , and when they do, they appear not to take action. But if it is Bersih rally, tear gas canisters or water cannon are deployed in the blink of an eye. SO if there are allegations of police taking orders from Umno-Baru, then they only have themsleves to blame.

Umno-Baru preaches violence when it is scared. The party is scared because its leaders are tainted by allegations of corruption and other crimes. Umno-baru youth, likes its core Umno-Baru supporters are afraid of Umno-Baru losing power. Losing power means losing all sorts of undeserved perks, like a means of making easy money without having to work hard for it. A means of escaping justice when they are guilty of crime.

THe peice below piece is applicable last year, as it is now. In this peice, I said that if Najib wanted the thugs to call off the violence, he could.; but he won’t because he is underscrutiny and he needs all the distraction he can conjure, to save his skin.

The real motive for the continual violence orchestrated by Umno Baru is usually hidden.

Most of us have been called worse than â€œcelakaâ€. However mad we may have felt, we did not lead a mob, baying for blood, with the intention of vandalising property in Kuala Lumpur and Kuantan, nor did we undermine the fragile semblance of democracy by storming the Penang state assembly building.

If you belong to Umno Baru, you can break the law and escape unpunished. The worst you will suffer is a rap on the knuckles. If Umno Baru had been called â€œnakalâ€ instead of â€œcelakaâ€, Umno Baru would have made the same response.

The news bulletins which showed Federal Territory Umno Baru Youth chief Mohd Razlan Mohd Rafii leading a group of protestors are revealing. He issued threats and jabbed his fingers in the face of a DAP representative saying; â€œI warn you. If you humiliate our party and race again, we will burn this building down — this building, which has produced many racists.â€ Around him, there were shouts of â€œLetâ€™s burn it downâ€ and â€œKill themâ€.

To the casual observer, Razlan is a classic bully. The face of Umno Baru. A product of Ketuanan Melayu (Malay supremacy). The few policemen who were present looked completely powerless.

At last, everyone can see for themselves how Ketuanan Melayu works! Most ordinary Malays resent being told that Umno Baru represents them. This is also the face of Umno Baruâ€™s brand of Islam, which aims to destroy property and to create chaos.

Razlan used his anger to intimidate. That is how Umno Baru has conditioned him to act; to grab what he wants, to be as offensive as possible because he is Malay, and therefore, he is entitled to behave aggressively.

An analogy is the child who sees his father beat his mother, and when he grows up, only knows how to communicate with his fists. Consequently, he treats his wife just like his father.

How ironic that Razlanâ€™s attempt to prove that Umno Baru is neither a violent nor a racist party relies upon the promise of violence and threats.

Last January, during an Umno Baru demonstration, its leaders paraded a banner which read, â€œBecause of DAP leadersâ€™ mouth, May 13, 1969, happened…Want some more?â€

This act of provocation was recently condemned by the Seri Delima DAP assemblyman RSN Rayer, who described the protestors as â€œUmno celakaâ€. In retaliation, Umno Baru showed their contempt for the state assembly and barged into the Penang Legislative Assembly demanding to see Rayer. In Kuala Lumpur, Razlan threatened to burn the DAP headquarters.

These acts show democracy â€œUmno Baru styleâ€. Ordinary Malays who witnessed or read about these incidents have distanced themselves from these â€œUmno Baruâ€ samsengs. Here are the responses of some Malays.

An IT professional in his thirties, who works in KL, said, â€œAre you sure Razlan is a youth leader? Barking orders, ranting and raving, screaming and yelling, with a tendency to explode (no pun intended) at the slightest provocation. He has no leadership qualities.â€

One accountant who has worked for 30 years with a foreign multinational firm gave a bleak assessment, â€œYou can kiss goodbye to foreign investment with people like Razlan around.â€

The Umno Baru reaction is one of fear. The Umno Baru thugs were not retaliating to the â€œcelakaâ€ remark. They were merely using the derogatory word to dupe and deceive the rakyat. They created an atmosphere of fear, in order to manipulate and control the public.

The reason for Umno Baruâ€™s insecurity is Dyana Sofya Mohd Daud, the new face of a multi-racial Malaysia. With Dyana in DAP, the party will appear more appealing to Malaysian youth, most of whom aspire to be Malaysian and multi-racial in outlook, rather than insular, conservative and inward looking like Umno Baru.

Although the Dyana factor is critical, Prime Minister Datuk Seri Najib Razak has failed to grasp that there are forces at work to undermine his rule and remove him. The nation holds its breath at the antics of Umno Baru Youth, but if things get out of control, it is the rakyat and Najib who have most to lose.

Forty-five years ago, renegade politicians orchestrated the racial riots which marked the end of democracy in Malaysia.

What goes around comes around. Today, Najib will taste that same medicine unless he exercises leadership and restrains his Umno Baru thugs. It all depends on the legacy Najib wants to leave.