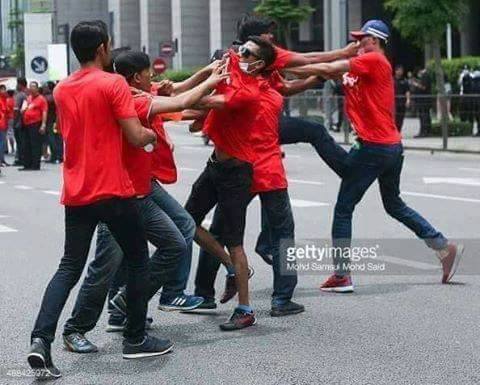 The Umno-Baru General Assembly (GA), at the Putra World Trade Centre (PWTC) is always a grand affair. Hundreds of Datuks and Datins, congregate in one place, over the space of a few days. They wear the same uniform, of blood red, puce pink or royal blue, but the uber rich are differentiated from the rest, by the latest imported luxury cars, in which they arrive.

If cattle are the status symbol of wealth for the Masai of Kenya, then handbags, watches and cars, are the Malaysian equivalent.

To alight from a sports car, a Maybach, an Overfinch or some other  luxury car with a unique number plate, tells others that you have reached the inner circle of Umno-Baru.

This year’s GA, was a combination of the old and the new, the past and the future. There was the usual sabre-rattling, the racial and religious divide, and the warning to Malays that the Chinese, in particular the DAP is out to destroy them.

More importantly, this GA has seen the rebirth of Ketuanan Melayu – the Supreme Malay. The story of a successful, young Malay man, is told in a leaflet, promoted by the Higher Education Ministry (HEM).

A few days ago, the DPM, Zahid Hamidi likened the Opposition to the Nazis. He does not know his history. The irony of Zahid’s suggestion is that the Nazis promoted the Aryan race, much like the Umno-Baruputras, have promoted Ketuanan Melayu.

In the back-to-the-future story of Firdaus, the subject of the leaflet promoted by HEM, we are told that he had memorised the Quran by the time he was 15. He is fluent in French, Mandarin, Arabic, English and Malay. He gained triple first class degrees in mathematics, accounting, and syariah law from Universiti Sains Islam Malaysia (Usim), before he qualified with an MBA from an unspecified university in France, and a PhD from Harvard.

If only the Malaysian HEM had a magic formula, to get more Malay boys to study and not drop out of school. These drop-outs excel at becoming Mat Rempits. The fiction hides the Malay reality. The ministry has difficulty persuading  Malay males, to take up courses in science and engineering, instead of religious studies.

Firdaus, the young adult, becomes a CEO for a wakaf-based entity called SU Corporation. Flying on a private jet, he is seen leaving London for New York, where he is to sign an agreement for the purchase of a corporate office next to the Trump Tower, in New York.

The HEM’s spin doctors are really working overtime on this one. One only wishes that they could be a bit more creative in their choice of travel. By 2050 we won’t be rattling around in jets, but probably in teleporters. The Trump Tower will probably be dwarfed by other towers, or have been demolished, to make way for more green areas.

Firdaus consumes espresso, while talking to his mother, Fatimah from Baling, Kedah. She is wearing a red tudung, which her son bought from a boutique in Milan.

Was the person who wrote the script, in the entourage which accompanied Mustapha Mohamad, the International Trade and Industry Minister, who was allegedly sourcing weapons, in Milan,  at this time last year, with Najib?

It is hilarious that Firdaus’ mother speaks to her son, on an old Nokia phone. These phones will be museum pieces by 2050, and it is doubtful if the technology to support it, would still be around. The choice of Baling is significant, as Baling is the area in which hungry farmers staged hunger riots, during Anwar Ibrahim’s student days.

In what is clearly designed to show Firdaus’ compassion, we are told that he will be returning home, to help poor families.

If only that were true. So many of our young, could not care less for their elderly parents, let alone other people. The budget allocation for the elderly this year, was negligible.

The missing Malay woman in the Ketuanan Malay success story

Umno-Baru lives in a dream world, and ignores the decay of our multi-cultural, multi-ethnic society; but where is the successful Malay woman?

Is she busy taking care of her brood of 12, in a high rise condominium?

Is she one of Firdaus’ four wives?

Is she a single mum?

Why is she not mentioned at all?