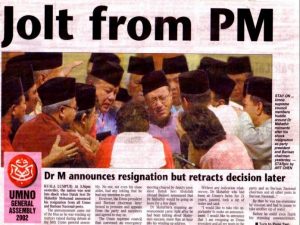 P. Ramakrishnan blasts Umno-Baru leaders (including MO1) for their hypocrisy. Umno-Baru leaders had accused Mahathir of being a dictator, but as Ramakrishnan points out, the same people were complicit in making Mahathir the all-powerful leader that he was. They oppose him now, only because he is trying to get rid of Najib Abdul Razak.

Umno is responsible for the mess we are in – NOT Mahathir! says P Ramakrishnan

Before Mahathir was involved in the ‘Oust Najib’ campaign, he was a much respected and revered leader and considered and accepted as a great Umno President as far as Umno, the Malay party, was concerned. He was perceived by the Umno leaders and his former cabinet colleagues as faultless and a trail-blazing wise leader.

But all that changed the moment he became the leading figure in the campaign to topple Dato’ Seri Najib Razak, the current Prime Minister.

Najib’s ministers and Umno leaders who had worked with Mahathir very closely during his tenure as Prime Minister have now turned against him very viciously. They blame Mahathir for all that was not right during his 22-year premiership. They accuse him of being a dictator during his time in office; that he had acted with an iron-hand; that he arrested and put away his critics; that there was no rule of law during his time.

To go by your argument, did he really become so powerful without your support? Who conferred the power on him to become that omnipotent? How could he act as he pleased without any restraint or accountability? How could his actions be legitimized without your endorsement and backing? As ministers in his cabinet, didn’t you go along with him?

You blame him for the mess the country is in. Did he single-handedly bring about this mess? Weren’t you comrades-in-arms? Didn’t you put up your hand in support to endorse his policies? That being the case, doesn’t that make you an accomplice and a collaborator? Aren’t you then as guilty as you now accuse him of being?

You accuse Mahathir of being anti-monarchy now. Was he anti-monarchy single-handedly? Do you remember the huge mammoth Semarak rallies in 1992 (?) Didn’t you cheer and applaud Mahathir when he criticized their lifestyle and ridiculed their court language? Didn’t you egg him on with your undivided loyalty to him?

Didn’t you support the setting up of the special court to try errant rulers who stray from the true path of justice and morality? Didn’t you pass the ridiculous law that enabled a bill to become law automatically when the royal assent was denied within a month of presenting a bill that had been passed by Parliament?

Weren’t you part of the cover-up of scandals and wrong-doings when you used your majority in Parliament to bulldoze through the much-hated and dreaded Official Secrets Act?

Aren’t you all collectively responsible for Mahathir’s action and for all that he did that you now consider obnoxious and vile? Didn’t you contribute to his actions by your consent and uncaring attitude?

Pause a moment, ponder a while and ask yourselves whether Mahathir acquired that kind of absolute authority without your consent, without you all conceding your right to check him in the interest of the nation and the people? Weren’t you aware that you owed a solemn duty to this nation to act responsibly?

Umno had the authority and responsibility to remove him and put things right when as you critics now allege, he crossed the line and demeaned the democratic way of life in our civil society but you chose to play ball with him. Who was responsible for undermining our parliamentary democracy: you or Mahathir?

Are the critics implying that until his resignation, Mahathir was allegedly allowed to cross the Rubicon, so to speak, without any cabinet minister, acting individually or in concert, failing to speak truth to power?

Their reaction on Mahathir’s resignation

When he announced his decision to resign in 2002, why were you all so shocked and dumb-founded and found it difficult to accept his decision to step down? Didn’t you send emissaries to persuade him to continue even beyond his 22-year rule? You wanted him to continue forever, it would seem! Did you ever say “Enough is enough”? You were contented; you were enthralled with him, weren’t you?

Umno had the strength and the means to remove him at any point during his 22-year rule. But what did you do? You gave your overwhelming, undivided support at every Umno Assembly! The Umno Assembly could have stopped him in his tracks and removed him as president. That would have effectively and automatically cast him aside as Prime Minister. Why didn’t you do that?

Now to condemn him for all that he did during his reign is nothing but sheer hypocrisy! Don’t you realize that by condemning him for his purported excesses, you are unwittingly condemning yourselves for your inaction? If the allegations are true, it is like the proverbial pot calling the kettle black!

If you now think that Mahathir was a monster, who created that monster?  My friends, you critics did it, willingly, without a tinge of conscience! And where does that leave you?

P Ramakrishnan is the long-serving former president of Aliran who served three and a half decades on our executive committee, has been with Aliran since its inception in 1977. Now an ordinary Aliran member, he continues to highlight issues of public interest to a larger audience.