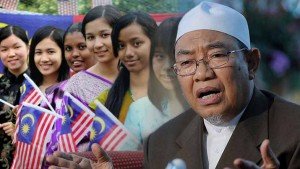 Najib Abdul Razak has finally stepped down and done a deal with Hadi Awang, the leader of PAS. The deal has allowed Najib to live in exile. Naturally, in luxury.

The irony is that after years of turning a blind eye to the extremists, they finally ousted Najib and established hudud law, not just in Kelantan, but in all of peninsular Malaysia. Hadiâ€™s wish for hudud came true.

PM Hadi is ousted by Harussani, Hj Jho Low is made deputy PM

The smile had hardly left Hadi’s lips when his rule as PM was terminated. He was not religious enough, and was deposed by the Perak mufti, Harussani Zakaria.

Harussani then made the one they call â€˜the chameleonâ€™, Haji Jho Low, his deputy.

The fall of secular Malaysia to an Islamic state and its steep descent into a conservative religious nation was swift.

Now, people are really afraid. They wear their religion on their sleeves NOT because they have become more pious, but to keep out of trouble.

Many Malays regreted not heedingÂ  the lessons from other hudud-ruled nations when they were â€˜freeâ€™.

They were numb when one morning after GE14, the headlines in Utusan proclaimed hudud for all, including non-Muslims.

Unmarried Sarawak men and women were inundated with marriage requests.

With hudud, Sarawak threatened to secede.

I am being driven around KL because in the new Talibanised Malaysia, a woman cannot drive.

The men in power, decided that women had to be chaperoned. Many Malay men resent having to babysit a woman.

Many of them dream of the life before, when they could lepak in peace, and were not forced to accompany female family members around.

Far from a drop in crime, the statistics show an increase in all crimes.

Starving people are forced to steal, to feed their families.

When men and women have their limbs cut-off, they cannot work. More people end up either begging or stealing food. It is a vicious circle.

Women suffer the most, under hudud

Foreign maids are afraid of working in Malaysia. They fear being raped by their masters and not getting justice.

Women who are raped know that they risk being accused of illicit sex and adultery.

There is an increase in backstreet abortions, because of unwanted pregnancies from rape.

Many women die, because they know that giving birth, even after being raped, is used as an excuse to charge them with illicit sex, for which the punishment is to be stoned to death.

The elite have cars, whilst the rest use camels for transportation.

I peer through the mesh on my burka. The ruling mullahs have also decided that women should wear the full-blown burka.

The rakyat is truly â€˜1Malaysiaâ€™ because no one can tell if the wearer is Chinese, Indian or Malay.

The queues of women who are afflicted with fungal diseases and rashes in this hot and humid tropics are long outside the clinics. Being covered, has caused a rash of skin diseases.

Public executions instead of sport

Sport is less popular now. Men have to wear full Arab robes on the football field, and sports-women are a distant memory.

The traffic jams are particularly bad when the people flock to the stadiums.

Stadiums are packed to capacity only during executions.

People are bored and go for the entertainment, watching punishments and executions.

Cinemas have closed down, because too much censorship has taken a toll on film makers.

The grounds around Dataran Merdeka have been ripped-up and drainage pipes installed. The drains channel blood from public executions.

The bridge between the Petronas Twin Towers has a new use. Lesbians, gays, bi-sexual and transgender (LGBT) people are thrown off it. Occasionally, it is also used to hang people, and display the bodies.

The cranes that were once used to build skyscrapers have a new life; they now display the bodies of the hundreds of criminals who are convicted by our glorious muftis.

At traffic junctions, heads of so-called criminals are placed above the lights, as a deterrent.

There is no more democracy. The order of the day is â€˜mobocracyâ€™. The mobs with the most guns are in control.

Meanwhile, the super-elite live behind high walls in the township re-named Putrahududa.

We are ruled by hudud, but the ultra-elite in Putrahududa, are exempt from this barbarism.