(NB: I wrote this piece in 2018, soon after the GE-14 win.  Wan Azizah has the power to uplift the lives of Malaysian women, especially Malay women, most of whom are held on a leash by their menfolk. I also think her hubby should NOT be allowed near her. ) 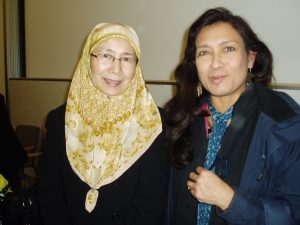 (December 2018) I don’t know what happens in the household of PKR president Anwar Ibrahim, but it does not harm some men to be told, “You get dinner ready for the family tonight, darling. I have to attend to important matters of state.”

In a completely hypothetical situation, if hubby refuses, Dr Wan Azizah Wan Ismail could easily say, “I am the deputy prime minister. Time waits for no man, neither does a good woman.”

It would be good for some Malay men to realise that women are not shrinking violets or door mats.

If I were Wan Azizah, why should I relinquish my position, as deputy prime minister? Any woman worth her salt would stand her ground and not allow her husband, or the prime minister-in-waiting, or anyone else, to oust her from her perch.

Naturally, Wan Azizah could only become prime minister if Dr Mahathir Mohamad were to become indisposed.

As a Muslim woman prime minister, her appointment would elevate Malaysia to the ranks of the progressive countries, which have women prime ministers or presidents. Britain, Israel, Germany, India, Australia, South Korea and Indonesia.

As deputy prime minister, Wan Azizah is the “number one woman” in the nation. She wields much power, or as much power as Mahathir, will allow.

She exudes more confidence, and is more self-assured. Gone are the shrill voice and hesitation, which hampered her when the responsibility of leading an opposition coalition, in her husband’s absence, was thrust upon her.

On the other hand, some political observers claim that she has also developed a lust for power.

Malaysia is a patriarchal society and becoming prime minister is an opportunity for a woman to make her presence felt.

In Malaysia, Malay Muslim men make the rules; but they also bend them to their advantage. Women cannot show themselves to be better than the men, without incurring their wrath.

Recall how PAS president Abdul Hadi Awang humiliated Wan Azizah when she was nominated to be the Selangor MB in 2014.

Perhaps, as prime minister, she can wield her magic wand and say, child marriages will be a thing of the past. Sex education must be introduced in schools. Single women will not be whipped for adultery. Syariah law will be standardised throughout Malaysia. Obedient wives’ clubs will be disbanded because they demean women. Men cannot marry more than one wife.

She could inform Malay Muslim women that the world can be their oyster, and tell many of the Malay men that it is alright to venture from their tempurung (shells).

Change will not come overnight and hundreds of thousands of Malay men will resist. This problem was created because Malay men (and women) were indoctrinated by many generations of Umno Baru leaders who know only one thing. Cash. With cash, they bought power, influence and transformed themselves into Adonises.