YIN says: I lived and worked in Indonesia for five years and have been going there many more. Let me share my observations with you.

In Indonesia (except for Acheh which is under Syariah Law) apostasy is not a crime. You don’t have to convert to marry a Muslim. The Indonesian Muslims are liberal and although they refrain from eating pork, handling it is not a problem. Alcohol is not an issue – there is a toddy shop near my house where people drink discreetly but openly. Other religions are practised without hindrance from the authorities or extremist groups. In a country where over 90% are Muslims, the cases of religious extremism is negligible compared to Malaysia.

I don’t need to comment too much about Malaysia – the land of halal trolleys, Muslim-Only dhobis, where Allah and many other words are exclusive only to Muslims – practices not found anywhere in the Muslim world.

But the difference is also glaring in other areas.

In Indonesia, the governors and mayors are elected directly by the people. The anti corruption agency directors are applied for by qualified people who put their names forward and they then go through a selection process and are finally endorsed by parliament. They have a fixed term office. The press is free and independent.

Indonesia, then and now

Yes, Indonesia has had its dark periods of rampant corruption in high places, racial discrimination and killings. But the country has come on by leaps and bounds.

Today, it has a President who travels by economy when not on official business. And he frequently goes down to the ground to find out for himself what is really going on and not just listen to his advisers.

Joko Widodo has a vision for the country and he has recruited capable people to help him realise his vision. Key cabinet ministers are appointed on merit, not race. Consequently, Indonesia is on the rise. 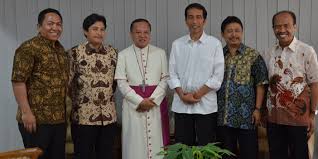 In Malaysia, we started off with good infrastructure and a good administration and education systems (left by the British). We were multi-racial in the true sense of the word during Tunku’s time; religion was a personal matter and not an imposition.

But in a few short decades the roles have reversed. Indonesia has progressed and we have regressed. They have become more liberal while we have become more repressed. While they have embraced multi-culturalism and inclusivity, we have instituted racial discrimination and exclusivity.

It’s not that we are so different people from the Indonesians – the majority of our population migrated from Indonesia.

So why are we where we are now?

Rotten leaders that’s why. Since Tunku, we have had leaders who are racist (to one degree or another) and who are corrupt. They play one race against another. They abuse their powers. This is not a recent thing – it has got worse, beginning with Mahathir’s rule.

How can we unite Malaysians when our ex DPM (now in PH) declare “I am Malay first, Muslim second” and then only Malaysian?

How can we make everyone belong when our leaders say Malaysia belongs to the Malays and the others are guests (pendatang) as the current DPM once said?

How can we progress when our ex-education minister (Muyhiddin) say our education is the best in the world when everyone knows it’s anything but?

How can our bureaucracy be efficient when recruitment and promotion is based on race?

Or how to raise our economy when we are not using our best talents? Or restrict opportunities to only one race.

Rise to the challenge

Our only hope is to elect leaders with integrity and who will govern for All Malaysians – not just one race. If we are timid and continue to elect a government led by someone who is not Malaysian First period, we will not get out of this vicious circle of race and religion.

Sometimes we need surgery to remove the infected part – leaving even a bit will lead to further contamination in the future.

Voting BN will be like that. Voting for a Mahathir-led government is no better.

Malaysians must be bold and demand real changes – not cosmetic changes.

A good leader can make all the difference; just look at Indonesia and Singapore.

If Indonesia can rise from the depths of the Suharto rule, or the Philippines after Marcos, we can also.

We just need the right leader and he is neither Najib or Mahathir. Anyone else would be an improvement.