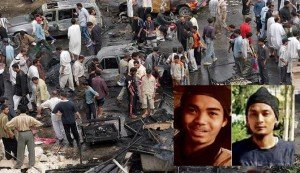 There are believed to be 17 dead Malaysian Daesh terrorists, and in the last two weeks 33 people died when two Malaysian suicide bombers blew themselves up in Raqqa, Syria and Spekher, in Iraq.

Why would young men, because it is principally young and able-bodied men, who leave home, not for a better life or to seek fortune, but to kill others including women, children and non-combatant men?

Not all of the people who join Daesh are from poverty stricken and deprived backgrounds. Some are from stable, well-to-do families. Many are educated. So, what compels these young men to be radicalised, and commit evil things, like throwing people off high buildings, raping women, beheading people and performing summary executions, in the name of religion?

For a start, we should not refer to the terrorists as Islamic State (IS), or â€œISISâ€, because these terms give them legitimacy. They perform evil things in the name of Islam and con people into thinking that it is a state.

Just call them Daesh or Da’ish, which is a loose acronym of the groupâ€™s Arabic name, al-Dawla al-Islamyia fil Iraq wa’al Sham (Islamic Sate of Iraq and the Levant). The terrorists hate the term Daesh because it sounds like the Arabic words Daes (â€œone who crushes something underfootâ€) and Dahes (â€œone who sows discordâ€).

Amirul detonated a bomb, in his car, and killed 21 Kurdish fighters. Syazwan wore a suicide vest and killed 12 policemen at a police training centre. Two years ago, Syazwan persuaded his younger brother, Muhamad Shazani to join him.

More Malaysians, especially Muslims, must condemn the killings. Psychopaths are killing, maiming and inciting violence, conveniently saying they are doing it for Islam. They are not! They are just sick and evil people, who bring disrepute to Islam and shame law-abiding and God-fearing Muslims.

Last March, the IGP Tan Sri Khalid Abu Bakar warned Malaysians not to question Islam and hudud, because this may invite retaliation from Daesh.Â  He did not rule out an incident, similar to the Paris terrorist attack, in Malaysia and said, â€œWhy not? Which is why we do not want the public to discuss this matter publicly.â€

The IGP is wrong to equate an intelligent discourse about hudud, or Islam, with invitation to Daesh. Debating about multi-culturalism and the things that affect our unique Malaysian way of life have nothing to do with death cults. Is the IGP using this issue as an excuse to silence discussion, and control us?

Khalid also said potential attacks could be carried-out by locals, who had been â€œpoisoned or brainwashedâ€ by Daesh, or by foreign militants, who had evaded police capture.

The contradictory messages donâ€™t help. Last October, black Daesh flags were openly spotted in Perak, Terengganu, Kedah and Selangor, but the Special Branch Counter Terrorism Division chief SAC Ayub Khan dismissed these and said there was no imminent threat, nor need for the public to be concerned.

It is difficult to accept these explanations, when we cannot discuss so-called sensitive issues.

We are expected to have faith in PDRMâ€™s anti-terrorist actions, and yet, unmarked graves of thousands of the victims of human traffickers were undetected, for years. We are alarmed that the police appear overworked, arresting Opposition politicians, NGOs, human rights activists and students.

Communities need to open up, and interact more visibly. Some people have a romantic version of going on a jihad, and so the authorities should organise a publicity campaign to warn about the conditions in a war zone, peer pressure and social media being used to radicalise them.

Muslim women can help. They can detect signs that younger members of their family are preparing for a jihad, with the purchase of outdoor clothing, and camping paraphernalia. Perhaps, the youth react violently and angrily, when talking about religion.

Others hide obvious signs of leaving, but appear closer to family members, as if to say goodbye.

A few will just disappear, and their parents are later told, that they are dead.

Muslims need to teach important values to their children, about moderation, law and order, tolerance and living peacefully beside others of different faiths.