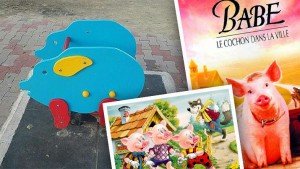 On Nov 9, spring rocking-horses at a children’s playground on the Penang Esplanade were removed after photos of the design went viral. Within a few hours, the rides, which resembled pigs, had been removed and replaced with ones which resembled birds.

The Penang Muslim NGO coalition secretary, Ahmad Yakqub Nazri, was shocked to see the pig-like rides and declared that the people who installed them had been “clearly insensitive to the Muslims in the state”.

When will these overly sensitive Muslims lighten up?

If images of pigs are removed from publications and playgrounds, Malaysian children will grow up not knowing what pigs and wild boar look like.

The Asterix comics will have to be banned because every success is celebrated with a feast of roast wild boar.

Will the Year of the Pig be banned?

Will Disney cartoons featuring the pig also be banned?

Christien Meindertsma is a Dutch designer and artist. Her research showed that 185 products are made from different parts of the pig. Will Jakim ban them all?

If we were to ban dogs, in the future, might the Royal Malaysia Policeâ€™s (PDRM) dog unit be forced to have kambing, perhaps. The thought of attack-kambings guarding our military establishments is alarming. Will sniffer-kambing make good drug detectors? The kambing smell more than the drugs!

For full article, about the possible ban on words in the English and also Malay languages, please read http://www.theantdaily.com/Main/Why-are-we-under-attack-from-bird-brained-people#sthash.Ud9aQhgQ.dpuf

Photo Credits to The Ant Daily

It is a sad nationÂ  in which piggy banks cannot be called piggy banks anymore…. perhaps, the government should ban Malays from travelling outside Malaysia……too many piggy porky swine hog boar elements around!