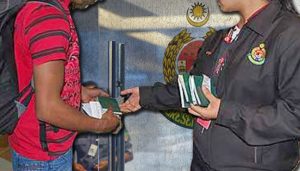 Civil servants are just like the rest of us, who work. The things we do may annoy some people, but we are only doing our jobs.

If some steps are omitted, because they appear to be laborious, then others may complain that special treatment is being given.

This may happen at security checks, when people are asked to take off their shoes or remove their belts.

The Singaporean mother and her two teenage children, who were arrested for their alleged tirade, accompanied by a rude hand gesture to a Malaysian Immigration Department officer, deserve their two week detention. They are on remand, whilst investigations are carried out.

The Star reported that the Singaporean family were traveling in a car withÂ  tinted windows.

The Immigration Officer, at the Bangunan Sultan Iskandar Customs, Immigration and Quarantine Complex asked for the back window to be lowered, so that he could inspect the occupants of the car, but the family refused.

They verbally abused the officer. and one family member made a rude hand gesture. When the family was arrested, they claimed that the officer had demanded a bride.

Punish them, if guilty

If the investigations reveal that the trio were rude, abusive and lying, the full force of the law should be applied.

They are to be investigated under Section 56(1)(g) of the Immigration Act; the penalty is a maximum RM10,000 fine, or a maximum jail term of five years, or both.

No one should be subjected to abuse, either physical or mental, just for doing their jobs.

What about rude civil servants?

On the other hand, what about civil servants who abuse ordinary members of the public?

Some of us are reluctant to complain, because we are at their mercy.

Our land application may be rejected. Our request for planning permission may be placed at the bottom of the pile, or become lost in the system. Our work permit or visa extension may fail, without an explanation.

A few readers have said that some civil servants are abusive towards members of the public who are unable to speak MalayÂ¹, who have not completed some departmental forms, look poor, are from the rural areas, or are unable to communicate well. They say that the civil servants shouted and roughly addressed, the people.

Who will ensure that these rude civil servants are investigated and disciplined for their poor behaviour?

Last April, a female immigration office allegedly punched and kicked a foreign worker. Her co-worker did nothing to restrain her. The officer appeared to be a demented, mad woman, who got her thrills from kicking others.

If she finds her job stressful, then why not ask for a desk job or a transfer to another department or ministry?

We applaud the speedy action taken against the abusive Singaporean family.

Will the same efficiency apply to civil servants who abuse some members of the public?

Note: Â¹A friend’s Taiwanese business partner went to a Malaysian beach resort for holiday. His camera and wallet were stolen. He went to the police station to lodge a report. The policeman assumed the tourist was Malaysian Chinese and gave him a hard time for NOT speaking Malay.