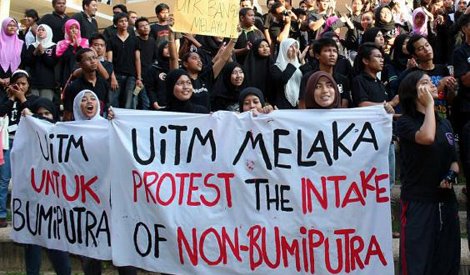 What has “bumiputeraism” done for the Malay, apart from giving him a sense of entitlement and make him lord it over the other Malaysians who are not Malay?

The so-called “bumiputeras” could make a real difference in Malaysia, but labelling people, “bumiputera”, is not the way forward. After 60 years of sleepwalking, of which 40 were spent living in denial, Malaysians need to wake up. The term “bumiputera” needs to be consigned to the history books, immediately.

If the people want another reason to reassure them that “bumiputeraism” is wrong, and misleading, they need only look at the Orang Asli, and think, “Why are they, the original settlers of the peninsula, not considered ‘bumiputera’?” The Malays are as pendatang as the non-Malays whom the nationalist Malays like to denigrate.

The word “bumiputera” is synonymous with privilege and division. It manifests itself in racism. It is divisive. It is unfair. It creates a lot of angst and builds resentment.

No parents would like to admit that any one of their children is their favourite. No teachers would like to admit that they have pupils whom they like best, and treat better than the rest of the class. Why should any Malaysian leader mark out a section of the population, to whom they give special treatment? Some of us complain about the west having a class system; we are no different.

For more than four decades, the Malays were told that as “bumiputeras”, they were special. In reality, the term was only used as a feel-good factor so that the majority of Malays could be manipulated by Malay politicians, to harness Malay votes.

Rich bumiputeras benefit the most

The GLCs and bumiputera corporations, which have a finger in every Malaysian economic pie, are helmed by Umno-Baru appointees. Rich bumiputeras benefit the most from “bumiputeraism”.

Rich Malay children benefit from scholarships, when their parents could easily afford school and university fees. Rich Malays get a hefty discount on the purchase of luxury houses when by right, the discount system should only help needy Malays. Rich Malays benefit from share allocations, when in real life poor Malays have no spare cash to indulge in the buying of shares.

Affirmative action policies mean that the Malays are regularly spoon-fed and given bigger crutches to make them dependent on the government.

Sadly, the daily diet of Biro Tatanegara (BTN), of being told false stories that the Malay race and Islam are under threat, that the DAP, Christians and Chinese are going to undermine Malaysia, means that few Malays want to leave their comfort zone, and ditch their reassuring “bumiputera” tag.

Many non-Malays, who enter the big bad world of education or commerce, must learn from their mistakes. The Malays are spared such agonies. Many non-Malays must also try harder and work twice as hard. Not so the Malays.

A non-Malay may get a string of As and be active in sports, charitable deeds and non-academic activities, but he may still not win the coveted scholarship to a public Malaysian university. It is alleged that in schools, the pass mark for Malays is lowered, so that more Malays are able to progress onto the next stage of their education. How fair is that?

Instead of making the Malay strive harder, we are rewarding mediocrity. We hear stories about some Malays failing to make the grade in their first year at overseas universities. It is not entirely their fault. Throughout their young lives, they were told they were the cream of the crop. Suddenly, overnight, they must enter the competitive world.

For a few Malays, studying overseas is a massive culture shock. The girls at least, have stepped out from a highly regulated “bumiputera” world, where many things are taboo, to a fascinating place where the sky’s the limit. Whereas in the past, they were continually told what to wear, how to behave and what to do, now they are free to do as they please.

The “bumiputeras” with a “kabel” to senior Umno-Baru politicians, thrive. Ordinary “bumiputeras” have to fight among themselves for a slice of the increasing smaller economic pie.

Any true Indian Muslim worth his salt will be proud of his Indian ethnicity and heritage. Indians are normally associated with the Hindu religion, so an Indian who professes to be Muslim is merely changing his faith. He is not changing his race. Changing one’s religion does not alter one’s genetic make-up.

If Indian Muslims are to be given “bumiputera” status, Chinese Muslims, Bangladesh Muslims, Bosnian Muslims or Indonesian Muslims should be accorded the same status.

Watching on the sidelines will be the Malay, who until now, saw himself as the privileged “bumiputera”.

With other races jumping onto the “bumiputera” bandwagon, the ultra Malay will discover that the special “bumiputera” club, is getting overcrowded, and its Malay genetic DNA much diluted. When everyone is special, no one person is special.