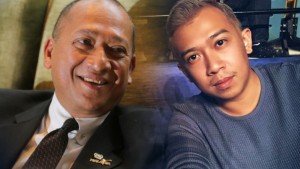 When you think about some politicians’ children, you begin to wonder why they are employed by a particular institution. Some children possess the necessary qualifications, but their most important qualification, is their parents. Their father’s position at the top of the greasy political ladder, is seen by private companies as a good investment. It is an extension of the “You help me (my child), I help you” Umno-Baru culture, propagated in Sibu.

The companies are investing in access to confidential information, and maybe, a chance to influence a particular government policy in the company’s favour. In some cases, the company has no choice, but to obey.

When Nedim Nazri, the tourism minister’s son, was listed on his father’s ministerial website as a “Special Assistant”, the public outcry was unprecedented.

Parents, who know the boy from the time he was at school with their children, were the first to remark, “Him? If he can be Special Adviser, my son can be a minister, and my daughter, who is smarter than my son, can be the prime minister.”

She was right. Before the day was over, the ministry clarified matters and said that there had been an error. Nedim was only a special assistant to his father’s constituency.

People power forced Nedim into a massive climbdown. Gone was the possibility of jetting all over the world, on behalf of papa. Instead, it was a sobering thought to organise youth activities, in Padang Rengas, a small town in central Perak.

Last week, The Wall Street Journal (WSJ) reported that Anis, the daughter of Jamaluddin Jarjis, the late Malaysian Ambassador to America, had been hired at Goldman Sachs (GS). Was this appointment a coincidence, as it occurred at the time that GS became advisors to 1MDB, and was paid above average commissions in 2012 and 2013?

A pilot once alleged that the child of a political crony was awarded his flying certificate, even before he had completed his exam. When asked if this compromised airline security, he said, “It is a win-win situation. The young man will be given a desk job. His parents are pleased he is working, and the company has an inside link to the politicians.

“The company would not dream of putting him in a position which would compromise safety. They are not stupid. It is a small price to pay for access to information, in the future.”

In other cases, politicians’ children get their hands on taxpayers’ money, via major government deals, like the provision of air-traffic control systems, and the recent National Feedlot Corporation (NFC) scandal.

Likewise, government scholarships and multi-million ringgit contracts, for major infrastructure projects, are awarded to children of politicians and their cronies.

Padan muka to “His Bratness”

Perhaps, the worst insult was when young people were attempting to enjoy themselves at a nightclub in Singapore. They were trying to have a good time, but a politician’s son muscled-in, and robbed them of their leisure pursuits. He stopped them listening to their favourite DJ, Fila of the internationally renowned Egyptian trance duo, Aly & Fila.

Malaysiakini reported that the dance floor at the Singapore nightclub cleared, five minutes after the spoilt brat started deejaying.

Perhaps, the politician’s son, should have been employed at the Bersih 4 march. If he had cleared Dataran Merdeka, as quickly as he cleared Zouk nightclub, he would have been very popular with DBKL and PDRM.

The sons and daughters of Malaysian politicians have a strong sense of entitlement, which you rarely see in the children of western leaders.

The children of our politicians act like the world owes them a living. The incident in Zouk, will drive the message home to the youth of Malaysia and Singapore, that enough is enough. Sweet irony!

Question: What is the difference between leeches and spoilt brats?
(ANSWER: Leeches have medicinal value.)
Rebuilding Malaysia