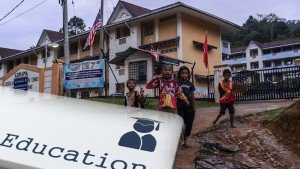 My article, of the same title,Â  was published last week, in TheAntDaily (see link below) BEFORE two of the missing Orang AsliÂ  children were found.

This raises more questions. How did the authorities search for the children? Were they rigorous or just slipshod?

Why did they focus their search on the Orang Asli villages, looking for the kids there…..?

It is also alleged that the parents had made a report to Suhakam that the police did not search for the children until five days after they disappeared. And yet the Home minister Zahid Hamidi, tells us that “they are extrememly concernced.” Utter hogwash!

I look at my eight year old nieces and nephews and although they live in the cities, even the most daring and adventurous of them, would NOT be able to undertake a 41 km hike in the jungle, without food and water. Even a four km hike would be hard work. I say this because the authorities assumed OA seven year olds can walk 41 km without food and water.

Worse still, the authorities allegedly suspected that the parents were hiding the children from the searchers?

What sort of government twists facts, turns around and blames the children and their parents for going missing?

I touch on a few issues,Â  in Malaysiakini http://www.malaysiakini.com/columns/315402

Our authorities, especially Home Minister Zahid Hamidi, will harass those who attempt to question the motives and lack of transparency in any failed government action…..Shame on him!

The main question, which needs to be addressed, and it may be an enormous can of wormsÂ  that is being opened, which is:

Why were the children fearful of the school. It has been alleged they were beaten, made to sleep on bare concrete floors, and wore dirty clothes, only had three full days of lessons, if they were lucky.

So what else is the school hiding?

The Minister of Education, and his stupid racist comments about Jews and Christians have a lot of answers to give. Actually, he should resign. His position is untenable.

Please be aware, that the disappearance of the seven young Orang Asli (OA) children reminds urbanites that indigenous children make huge sacrifices to gain an education.

Their plight reminds us of the Penan girls, who were raped by timber truck drivers in the Sarawak jungles in 2008. What is the real cost of these children’s education?

The OA children are the victims of a dereliction ofÂ  care, by the school authorities; the Penan girls lost their childhood innocence, some at 10.

Will those who were responsible, ever be brought to justice? Highly unlikely. The Penan girls did not even receive any compassion from the authorities.

The OA children, who board from the age of seven, are deprived of a family life, the comforts of home, and the familiar surroundings of their community. Likewise, the Penan girls, who were raped, when they hitched rides on timber lorries, to go to school, were at the mercy of unscrupulous men, who took advantage of their naÃ¯vety and vulnerability.