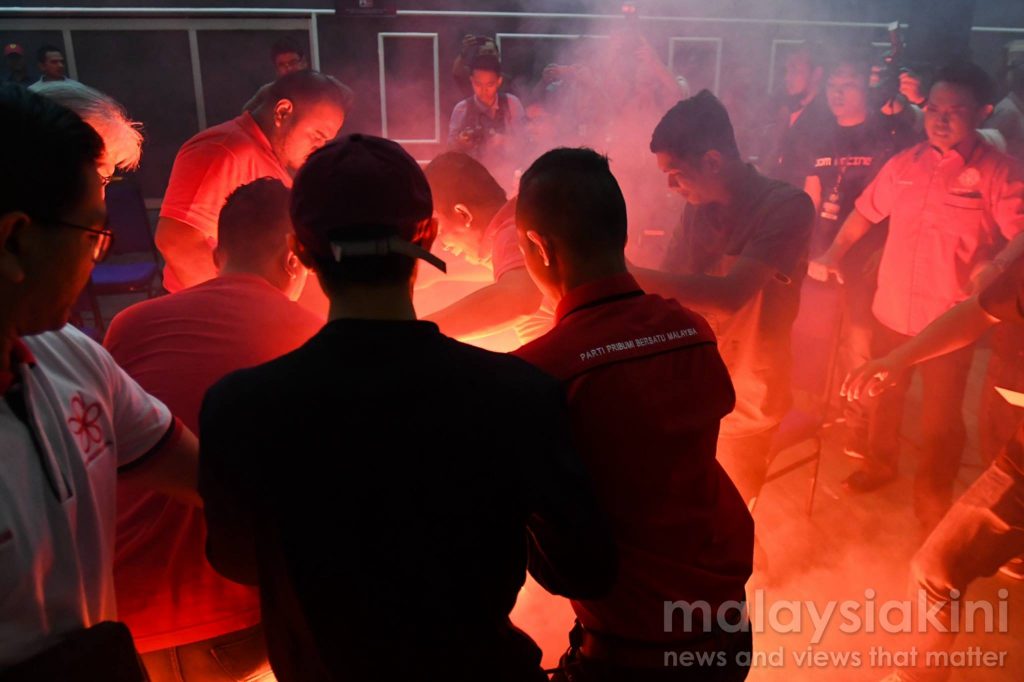 An attempt to undermine former PM, Dr Mahathir Mohamad’s ceramah, called “Nothing to Hide 2.0” broke up in chaos and pandemonium, when some Malay thugs, set off flares, threw bottles and chairs at the audience, then hurled slippers at the nonagenarian.

Mahathir had been invited to the “Nothing to Hide 2.0” forum which had been organised by Parti Pribumi Bersatu Malaysia (Bersatu) .

It was supposed to be a debate between Mahathir and the incumbent PM, Najib Abdul Razak; but we know that Najib has an aversion to debates and usually skips the country, when things are getting too hot to handle. He runs away.

Said one political observer, “This is the modus operandi of Umno-Baru. They send their thugs, to a peaceful event. Their aim is to create fear, to get the public to stay away and to send a message to the person or people who are staging the event, that they do not care about people’s rights, or safety, or democracy.

“The thugs, masquerading as the people who are going to a ceramah, will do anything to disrupt a normal event.”

His friend then added, “They threatened Zunar, the cartoonist, and wrecked his exhibition and sent Umno-Baru thugs to wreak havoc.

“It was Umno-Baru thugs who planned an assault on the Penang State Assembly a few years ago, because they were displeased with a state assemblyman’s comments.

“Umno-Baru thugs, attacked peaceful supporters and sent threatening messages to the Bersih 2.0 committee members, like Maria Chin and Ambiga Sreenevasan. Many other Opposition politicians are also targeted by these vile Umno-Baru thugs. Their leaders, run away, but they send their hooligans in.

Today, who else do you think fears a 92-year-old man most?

None other then Najib Abdul Razak and Umno-Baru.

The more thugs attack a 92-year-old man, the more the moderate and usually reserved Malays will wonder why such tactics are employed. They will start to ask questions. Why? What harm can an old man do?

This is NOT just about two adversaries having to fight a public political fight. The thugs sow more violence, but they will only make Malays question where their values have gone.

Desperadoes will do anything to stay out of jail. They are prepared to sacrifice the harmony of the nation.

Pity we have such a weak IGP.