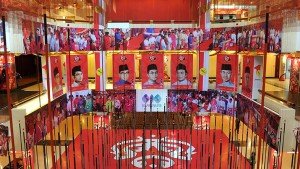 No wonder, the Malay extremists have demanded a Malay PM.

Our past prime ministers are perceived to be “Malay” PMs, when truthfully they are not 100% “Malay”. They have combined “Malay” and “non-Malay” blood.

When did your money become Umno-Baru’s?

This is an unscientific survey but it is an interesting observation. An elderly Malay, who will be 80 this year said, “Why must you keep criticising Najib and Umno-Baru?”

Before I could answer, he said, “I know that Umno-Baru is corrupt. I know about the RM4 billion. About 1MDB. I know all that.”

When asked if it was alright for taxpayers’ money to be abused, he said, “Look, if Umno-Baru wants to build roads, or buy condominiums, let them. After all, it is their money.”

Wondering if this man was just an ignorant Malaysian and a one-off, I asked someone else in another town. She was also of the opinion, that Umno-Baru uses its own money for infrastructure.

She said, “Our local politician takes money, but it is not so much. Just a few million. Not as bad as others.”

What makes her think that taking a few million ringgit is acceptable. Have some of us lost the concept of right and wrong? When did taxpayer’s money become Umno-Baru’s?

These were not kampung dwellers. One lived in Petaling Jaya, the other in Melaka. One was western educated.

Me: “Why not? You must have a reason for not voting PAS.”

Him: “No need for a reason. I don’t like that hudud stuff.”

Me: “Do you believe that the Malays need protecting?

Me: “The police, civil service and the army…are mostly Malays. Don’t you feel safe? After 58 years, what do the Malays need protection from?

Him: “The Chinese. They are everywhere.”

Me: “But so are the Bangladeshis.”

Him: “I know. My maid ran off with a Bangladeshi. Both Bangladeshis and Chinese should be sent packing.”

Me: “Without the Bangladeshis, who would drive the taxis, man the petrol pumps, the stalls in the markets, build roads and buildings? Your neighbours are mostly Chinese. Throughout your life, your electrician, mechanic, handyman and your wife’s hairdresser, have been Chinese. Who will you depend on, once they leave?

Me: “You can’t cherry pick who should leave, and who should stay. Moreover, they are Malaysians. Born and bred here.”

Him: “OK then, but no Chinese can be PM. We must continue to have Malay prime ministers.”

Me: “Tunku had Thai blood. Abdul Razak and Najib are Bugis.

“Hussein Onn had Turkish blood. Mahathir, you already know is a mamak. Badawi had Chinese blood.

“Strictly speaking, no Malay has ever been PM.”

“Mungkin, we have a Bangla PM next!…