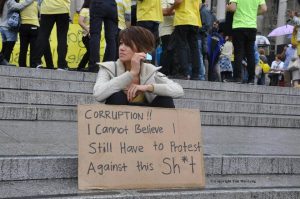 PM Najib Abdul Razak once asked the rhetorical question, â€œWhere would the Malays be without Umno-Baru?â€.

But would Najib have dared to ask the alternative question: “â€œWhere would Umno-Baru be without the Malays?â€”

Both Najib and Umno-Baru know that without the Malays, they are nothing.

Domination of the Malays is not about protecting their rights. It is all about power and status.

For close to six decades, Umno-Baru and the parties before it, used a similar line to the question, “â€œWhere would the Malays be without Umno Baru?â€. They wanted to create fear in the Malays but more importantly, to divide the nation.

Today, this line is irrelevant.

Malay graduates who return to Malaysia do so, to fulfil the terms of their scholarship or loan. Ask them what they feel about Malaysia, Umno-Baru and its leaders, and their stories will fill you with hope. Same with local students.

The government is afraid.

The current clampdown on dissent and the hunt for Malays who speak their minds is because the government is afraid.

A thinking Malay is dangerous. He or she is a threat to Umno-Baru.

A thinking Malay who is prepared to question the leaders and make them accountable for their actions will erode the power of Umno-Baru.

Young Malays like Anis Syafiqah Mohd Yusof and her friends, are leading the Tangkap MO1 charge.

One thinking Malay will embolden other Malays and very soon, Umno-Baru will become irrelevant.

The brain drain is no longer confined to non-Malays.

Malays have become disillusioned with Umno-Baru and are not just abandoning the party. They are prepared to forsake their country.

Today, young graduate Malays, who have been educated overseas, are telling their parents that enough is enough.

One Malay doctor said, â€œMy work experience in the (Malaysian) hospital was a bitter experience. I wasnâ€™t just overworked but when I asked the consultant for advice, I was shouted at in front of the patients and other staff.

â€œIt was humiliating and degrading. In the teaching hospital in Sydney, the consultants were pleasant and eager to train me. I felt appreciated.â€

A Malay farmer in his sixties said, â€œWhat is Najib doing about the farmers? The youth have no interest in agriculture They are leaving the kampong in search of jobs. Many farmers are now in their 60s and 70s. Who will take over my farm when I die?

â€œMany young men migrate to the cities. They remain unemployed and many turn to drugs or petty theft. What has the government done to make farming attractive?â€

Many civil servants feel demoralised. Their time and departmental operating budgets are increasingly being used for political, Umno-Baru activities. The ones who openly voice their opinions, risk their careers.

Even Umno-Baru supporters realise they are being conned. One senior party worker said that, with Umno-Baruâ€™s help, many Malay cronies drive imported sports cars and live in rumah mewah (mansions). When asked how Umno-Baru had helped uplift his life, he was dumb-struck. The penny had dropped!

When you hear stories like these you know that young Malays are not prepared to believe the lies of Umno-Baru, any longer.

The young Malays of today have an appetite for hard work, which is not matched by the Umno-Baru Malays, the Red Shirts, or Mat Rempit types whom Najib is fond of praising.

Without Umno-Baru, the Malays would be better off economically, financially, morally, spiritually and intellectually.

Without Umno-Baru, the Malays can restore their lost dignity.

Photo for demo purposes only