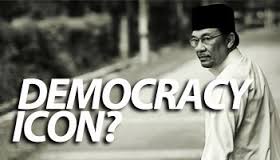 Shocking, isnâ€™t it? Many of you wanted former opposition leader Anwar Ibrahim to â€˜saveâ€™ Malaysia. He was jailed before he could accomplish this and it angered you, but only briefly.

Whilst Anwar languishes in jail, his health deteriorating, and his family feeling anxious, what did we do? Nothing! The call to release him received a lukewarm response. Did we remember his demands for change, and that heâ€™d galvanised the opposition parties under one banner? No!

All we remembered was that Anwar was jailed, for sodomy. Many did not care that it was a politically motivated plot, just as we do not care about his condition now. â€œMalaysians mudah lupa,â€ to paraphrase former PM Dr Mahathir Mohamad.

The truth is, Malaysians are selfish. What happens to others is none of their concern. Another death in police custody? One less prisoner to feed. Another abandoned baby? They should have taken precautions before having sex. Another sexually abused child? Sheâ€™s young; sheâ€™ll get over it. Another girl is raped? Serves her right for dressing immodestly. One wonders if â€˜theyâ€™ would have been as callous and indifferent if Anwar had been their father, husband, boyfriend or son.

Anwarâ€™s daughter, Nurul Izzah, has appealed to the PM to allow medical treatment and physiotherapy for her father. Anwar suffers from a bad back and a shoulder injury. Continual moving from place to place has exacerbated the 70-year-oldâ€™s blood pressure and his back problem. His muscle damage worsened when he was denied a bed during his first month in detention. Doctors have also found a growth in his kidney.

Remember the euphoria when Anwar carried the aspirations of the Malaysian rakyat in the Reformasi movement? Just before his arrest in 1998, Anwar addressed record crowds about the unjust Mahathir rule. On his release in 2004, he crystalised the three political parties, PAS, PKR and DAP into an effective opposition coalition.

Today, the irony is that the same people who championed Anwar have embraced his nemesis, Mahathir, or teamed up with Umno-Baru. A student learns from his master. The seed which Mahathir planted earlier enabled Najib Abdul Razak to jail Anwar in 2015.

So what has happened to the tens of thousands of Malay youths whom Anwar inspired by â€˜Reformasiâ€™? Or the businessmen who once complained about cronyism? Or the Chinese, whom the Malay ultras accuse of overstaying their welcome?

Malaysian loyalty is easily bought by bags of rice, or a fistful of dollars. The opposition need not bother about teaching democracy, rule of law and human rights, when we canâ€™t decide what it means to have principles, or demand that our politicians are accountable.

Malaysians seem unable to separate fact from fiction, and some Malays are stupid enough to believe Najib when he said that God helped him win the by-election.

Blaming him for Islamisation

So why are Malaysians reticent about helping Anwar? For a start, they blame him for the Islamisation of Malaysia, but are they aware that Anwar is not 100 percent responsible?

The roots of our extremism lie in the Iranian revolution of 1979. The resurgence of the Islamic movement, and the rise of Ayatollah Khomeini, was closely monitored by both PAS and Mahathir, the then-deputy PM.

Muslims from around the world, including delegations from PAS and the Muslim Youth Movement of Malaysia (Abim), paid homage to the ayatollah, but it is alleged that Anwar warned Malays that the ayatollahâ€™s brand of Islam was unsuitable for Malaysia. Anwar said that Malaysians had their own culture, and he wanted democracy, whereas the ayatollah referred to democracy as the equivalent of prostitution.

Mahathir was worried by the re-energised PAS, and Umnoâ€™s potential loss of Malay votes. When he became PM in 1981, Mahathir had noticed Anwar, the leader of Abim. The charismatic Anwar was creating waves, leading strikes to highlight the poverty and starvation in northern Malaya. Mahathir persuaded Anwar to join Umno, to counter PASâ€™s Islamic credentials.

Today, with Anwar in prison, PAS and Umno-Baru are in league with one another. PASâ€™s president, Hadi Awang, has revived the conservative brand of Islam which Anwar once rejected.

Cartoonist Zunar has alleged that after GE13, and before the formation of his cabinet, Najib tried to meet Anwar, when the latter was visiting Indonesia. Najibâ€™s plan was to entice Anwar to accept the post of deputy PM. Aware that the rakyatâ€™s requests for reform would not be met, Anwar declined to meet Najib.

We ignore Anwarâ€™s sacrifices, all of which have cost him his health, family life and his freedom. The sodomy charge is a red herring. Anwar was jailed because he is the catalyst for change. He refused the offers of political asylum, because the rakyatâ€™s needs came first.

The sodomy allegations were set up to get Anwar out of the way, because Najib and Umno-Baru feared his ability to galvanise the opposition.

Today, some of us are absorbed in our own world and reluctant to support efforts to release Anwar.

Arenâ€™t we better than that?

Remember that once, Anwar made us proud to call ourselves Malaysian. Now, Malaysia is the butt of foreign jokes.