We have more stupid ministers in the Cabinet, every time we read 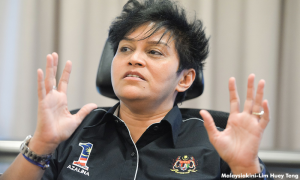 She is a waste of time and space in the Cabinet.

2) Then, The Wall Street Journal (WSJ) today, reported that the “…Saudi ministries of foreign affairs and finance had no information about such a gift”.

Moreover, the report continued, “… and that a royal donation to the personal bank account of a foreign leader would be unprecedented.”

Oops. What is happening here? All the time, Malaysians were told that it (all RM2.6 billion) was a Saudi donation. Here the Saudis claim no knowledge of the gift.

3) Malaysiakini reported that The Sydney Morning Herald said thatÂ  the Saudi government is investigating the matter.

4) Also in Malaysiakini, the BBC quoted an unnamed source, who wants to be anonymous, who claimed that the money came from King Abdullah (now deceased), to help Najib win the 2013 general election.

The source said that the donation was “…to help Mr Najib and his coalition win the election, employing a strategic communications team with international experience, focusing on the province of Sarawak, and funding social programmes through party campaigning.”

Here we have more confirmation about Saudi oil money being used to influence foreign governments.

5) The reaction in America.

Despite knowing about the hanky-panky, money changing hands faster that you can blink and denials all around, America still wants to do business with Malaysia and push through their TPPA. (business-lah bro!)

You begin to wonder about the American hype about justice, fighting corruption and evil regimes.

6) The reaction in Malaysia?

The Opposition, NGOs, social activists, human rights organisations, and even Malaysians with half-a-brain, will fume and fuss and demand Najib’sÂ  resignation.

On the other hand, Najib and his allegedly corrupt regime, with the institutions who fear him, dig in to defend their power, their wealth and their freedom (Yes. If the ordinary rakyat get a chance, all those who are tainted with corruption, abuse of power and breaking the law, will be put behind bars.)

Sadly, the majority of Malaysians do not react, especially the clueless MPs of Umno-Baru and the BN coalition. One political analyst said, “Why should the Umno-Baru and BN MPs, kill their own golden goose?”

So what are the Malaysian MPs, parliament, judiciary and royal families waiting for?

There is no smoke without fire. Despite the allegations, Apandi has exonerated Najib.

Every Malaysian has been tarred with Najib’s dirty brush.