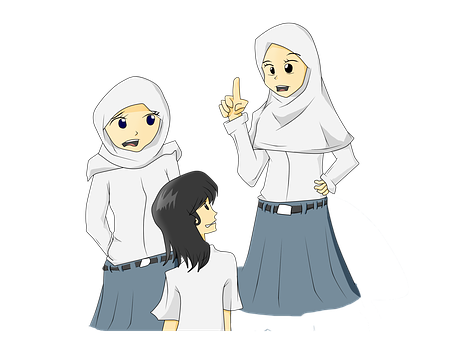 Here is one woman’s story, from the other side of the tudung-ban, one that you rarely hear about.

Malaysians were outraged when they read that some hotels had denied female Muslim receptionists from wearing the tudung. There were demands to boycott the hotels.

So, what happens if you are Malay and Muslim, and you are discriminated against because you do not wear the tudung?

Last February, a graduate of an English university was told, at the end of her first day of work at a company in Kuala Lumpur, that she had to wear the tudung, to work, the following morning.

She was not given much choice despite telling her boss, that not one member of the panel of interviewers had the courtesy, nor foresight, to tell her about the tudung requirement in the company dress code.

She checked her written contract and found no mention of having to wear the tudung to work.

She said that if she had known about the dress code, she would not have bothered to go through the various stages of the interview process. She quit her job and regretted that she had wasted time with this employer, when she could have spent valuable resources on seeking other employment.

So, is this graduate being discriminated against? Would the critics of the recent “hotel hijab ban ” fiasco, have sympathy with her? Or would they argue that she had not conformed to her Malay employer’s and Malay Malaysian society’s strict definition of a Muslim woman at work?

In the “hotel hijab ban” debate, various people said that international hotel chains had to recognise that Islam is the religion of the Federation and local sensitivities had to be recognised. Many ministers have demanded that these hotels observe the Constitution and the people’s right to religious freedom.

Where does that place this Malay graduate? She is Muslim, but she does not wear the tudung. She was exercising her right to work but that right was taken from her, when her employer decided to impose his own tudung rule.

Wearing the tudung is not necessarily a personal choice

The explanation given to this graduate was that the company had many contracts with the government, and that government officials had the tendency to drop-in unannounced.

Wearing a tudung is a personal choice, for Muslim women. This graduate had not violated any religious rules, on the other hand, the employer had discriminated against her, because he wanted to appease any government official, who might visit the office.

It appears that, for this company at least, government policy dictates the employer’s behaviour.

The boss of the company may have recognised the value of this graduate’s credentials, her English university degree, and the fact that she was fluent and articulate in English. The graduate has a charming personality, is creative (she graduated in architecture), has a flair for design, and unlike many Malay girls of her age, is neither reticent nor reserved.

The boss probably realised that his company had to conform to the dress code for Muslims, especially Muslim women, expected by the government. 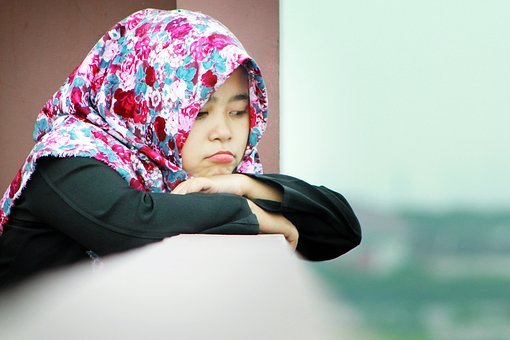 Over the years, visitors to government departments have been turned away and told to cover-up, even though they are well dressed. The women visitors have conformed to the guidelines which are displayed on posters, but over zealous “Little Napoleons” tend to over-react.

Despite wearing long or mid-length skirts, and tops with sleeves which cover their elbows, many women were told-off for disrespecting Muslim sensitivities.

The security guards, probably fearing a backlash from the Pengarah of the department, often insists upon his strict conservative interpretation of the dress code.

Various Ministers and MPs have criticised  the Malaysian Hotels Association for discrimination, but they forget that government departments like to practise double standards, and disrespect members of the tax-paying public. 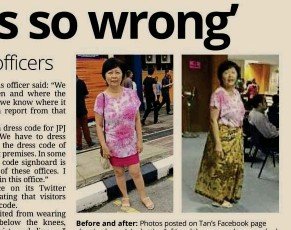