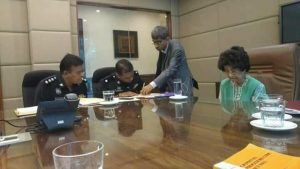 Is PM Najib Abdul Razak so afraid of his former mentor, Dr Mahathir Mohamad, that the police have been ordered to question 91-year-old, Siti Hasmah, Mahathir’s wife?

The real reason Najib is afraid is because Mahathir is a better political tactician and strategist than he.

Mahathir was the Malaysian leader for 22 years. He knows the tricks of the trade, what levers to pull, how to communicate with the rural people, how to wield the stick, how to reward civil servants and cronies.

Now that they are on opposite sides, Najib wants to punish Mahathir by applying pressure, on Mahathir’s inner circle and his children/grandchildren, and dismantling Mahathir’s legacy, like Proton.

The problems in Proton did not develop overnight. When Mahathir was PM, Najib and his cabinet were waxing lyrical about Proton. Now, Najib is behaving like a jilted girlfriend, because of their political differences.

If that is not enough, Najib is now targetting Siti Hasmah. This move will backfire.

Why do the police want to question Siti Hasmah?

Siti Hasmah’s lawyer, Haniff Khatri Abdulla, told reporters that the case is being investigated under Section 9 of the Peaceful Assembly Act. The police asked her 12 questions about her speech at the protest called the “Purple Rally“.

The Purple Rally was also known as “Women Against Toxic Politics”. Many of the rally goers were dressed in purple and they urged Malaysians to rally against political violence, threats, racism, sexism, hate speech as well as the government’s alleged failure to ensure public safety and sanctity of the Federal Constitution.

Siti Hasmah had addressed a crowd of over 1,000 people in Kuala Lumpur, and said that the nation needed to put an end to toxic politics. She expressed concern that people were being slapped for simply voicing their opinions. She said, “That is why us women strongly oppose toxic politics. Before the toxin enters our body, we better prevent it. Stop it. […]

In May 2017, film producer David Teo was assaulted for telling Najib that he should field questions from across the audience instead of just one portion of the crowd. The man who slapped Teo, was actor Mat Over, an attention-seeker wanting to revive his failed career.

Our questions for the police

Is the move to question Siti Hasmah politically motivated?

Who issued the orders to question her – Najib or Zahid? No-one belches in the police force, without orders from the top.

Why did the police not view Siti Hasmah’s speech which is available online, rather than harass her in this manner?

Why did they consider her speech inflammatory? How had she broken the law with her speech? Why was she not arrested at the time?

What has the police not taken any action against the man who made the “Kepala Bapak kau” remark?

The leader of a nation, who remarks “Kepala bapa kau“ at a public function is crude and there are many names one could call Najib and ‘prime ministerial’ is not one of them.

To use language that most Malays, would consider being from the gutter, is not becoming of a leader.

It is worse, for the police to summon Siti Hasmah, and question her like a common thief.

The Malays will turn against Najib. Well done MO1!