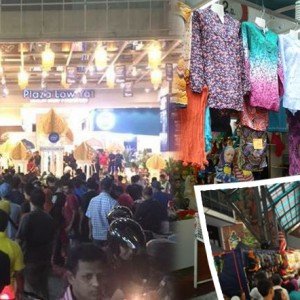 The multi-storey Wisma Yakin was built on the plot of land which originally housed the Malay Bazaar of the 1950s. The original stall holders were allowed to have a lot in Wisma Yakin building.

Several family firms which started as a stall in the Malay Bazaar became large corporations and household names, many based in Wisma Yakin.

Wisma Yakin was famed for its traditional Malay baju kurungs and baju Melayu and outstanding fabrics and other paraphernalia.

Problem one: DBKL starts to erect an awning in front of Wisma Yakin, to emulate Petaling Street.

The occupants of Wisma Yakin protest, but Isa Samad, the Federal Territory Minister then, goes ahead, in a deal which allegedly profited him.

Problem two: The traders set up stall under this awning.

They block traffic to Wisma Yakin. They also block the entrance to Wisma Yakin. Traders in the building complain of reduced customers going to their shops, especially the more affluent patrons.

Problem four: The spillover effect of the increased Friday prayer congregation means that no Friday prayers are possible because the stalls occupy space.

Problem five. The Malay stall holders are content to let out the stalls, to Indonesians, for a few thousand ringgit.

Problem seven. Lack of enforcement means that the stalls operate outside of the strict operating hours. Moreover, the foreigners start to make their stalls more permanent thus breaking all the rules.

Problem eight. Firms housed in Wisma Yakin are furious at the lack of enforcement.

Problem nine. Wisma Yakin is adjacent to the Masjid (mosque) India. On Fridays, the road in front of the Masjid India would be cleared of traffic so people who converged onto the mosque could pray outside (weather permitting). With the bazaar area, this was not possible anymore.

Problem ten. Obstruction causes a safety hazard. When a fire broke out in Wisma Yakin, fire engines were unable to reach the building.

So, in the end, the Malay traders, which DBKL wanted to help were the ones whom DBKL failed because of lack of enforcement and allowed foreign traders to dominate.