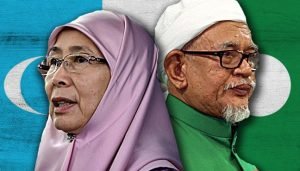 Does PKR know what the electorate wants?

The rakyat do not want wishy-washy politicians. We want firm leaders who have our interests at heart.

We do not want race and religion to set us apart. We know that we can move forward only when we have strong leaders who would not allow themselves to be stabbed in the back twice.

We certainly wonâ€™t trust a political party that vacillates from one viewpoint to another or make an alliance with a known enemy.

After the Sarawak state election, PKR Deputy President Azmin Ali horrified us when he expressed an intention to invite PAS back into the opposition coalition for GE14.

This week, it was PKR President Wan Azizah Ismailâ€™s turn to shock us. She suggested that PKR could talk with PAS about the upcoming by-elections in Sungai Besar and Kuala Kangsar.

Why does PKR want to do business with PAS? Joining up with PAS and Hadi Awang is like taking a step into the unknown.

Can Hadi be trusted after all his machinations against the opposition coalition and the deals he has made with Umno-Baru?

Is Wan Azizah a stickler for punishment, or has Azmin Ali managed to convince her of PASâ€™ shining qualities? Is there a plot of some kind that weâ€™re yet to uncover?

Malaysia does not need politicians who are misogynists.

Hadi humiliated Wan Azizah when she was nominated for the post of Selangor MB. After a month of silence, he finally admitted that a woman could not serve as MB. He even hinted that he feared people would go to hell if they were ruled by a woman as MB or PM.

At the 2014 PAS muktamar in Johor, Hadi insulted two PAS assemblymen because they supported Wan Azizahâ€™s nomination. He called them â€œbaruah,â€ using a loaded Malay word for â€œlackeyâ€. Itâ€™s original meaning is â€œpimpâ€.

For all we know, Hadi is still in discussion with Umno-Baru for a unity government.

Doesnâ€™t Wan Azizah remember Hadiâ€™s arrogance? He said he would attend Pakatan Rakyat meetings only when he felt like it.

What does PKR stand for?

Why is PKR afraid to take a firm stand? If itâ€™s policies are good for the nation, it should forge ahead with them with confidence and thereby strengthen public trust in it.

However, if it shows indecisiveness and teams up with PAS, whatever trust the public now has in PKR will be eroded.

The rakyat have waited 59 years for a leader they can trust. They will not mind waiting a few more years for the right party to present such a leader.

PAS is not that party, especially with its desire to implement hudud.

Hadi is not that leader, and neither is anyone who jumps into bed with him.