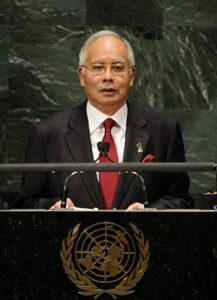 The IGP, Khalid Abu Bakar did not waste any time investigating Malaysiakini for its alleged funding from the Open Society Foundation (OSF) because of its links to George Soros, the Hungarian-American billionaire.

Umno-Division leader, Jamal Yunos, who leads a rent-a-mob outfit, called the Red Shirts, demanded an explanation from Malaysiakini, and threatened to tear down the walls of the Malaysiakini office unless he was satisfied with the reasons.

A few weeks ago, Jamal said he would start an all out war with Bersih. Bersih just wants clean, free and fair elections.

Why is this pip-squeak allowed to threaten people and still escape prosecution? Why is the IGP not doing his job?

The Home Minister, Zahid Hamidi, ever ready to be in on the action, has also demanded that Bersih be investigated for its alleged funding, from OSF.

The secret meeting which Najib does not want you to know.

A report about this private meeting is here.

It was first revealed in 2012, by Subang parliamentarian R Sivarasa during his debate with the Perkasa information chief Ruslan Kassim.

The Najib-Soros meeting took place at the luxury Plaza Hotel in Manhattan. It was also the same day that Najib made his maiden speech at the UN General Assembly in New York.

Malaysiakini has also confirmed with a source who has direct knowledge of the event, that the  Najib-Soros meeting did take place.

The Malaysiakini report also states that “It is believed that at least one other top Umno leader was present at the get-together.”

Will the IGP, the Home Minister and the Red Shirts leader, find out from Najib, what took place?

So, what happened between Najib and Soros?

Divide and rule, is Najib‘s motto

For years, Najib and Umno-Baru leaders spouted the line that the Malaysian Chinese were pendatang and not to be trusted. That the DAP party, would turn Malaysia into a Christian country and sell Malaysia to the PAP, the Singapore Chinese, and ultimately, the Jews.

Now, who is it who cannot be trusted?

Quietly, Najib opened the floodgates to his new buddies, in Beijing.

The Umno-Baru supporters and Malay extremists are stunned into silence.

So will they demand that the IGP and the Home Minister investigate Najib for his links with Soros?

They did not believe that MO1 stole taxpayers’ money.

GE-14 is coming. A vote for Najib is a vote for Soros! Wah kah kah…