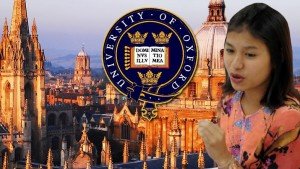 Many Malays have PhD or “Penyakit Hasad Dengki” which means that they are consumed with envy and jealousy. The crab mentality they possess is a particularly destructive trait. They like to use emotional blackmail to bring a successful Malay down.

Hajar Nur Asyiqin Abdul Zubir, an 18-year-old, from Pahang, was awarded a Bank Negara Malaysia (BNM) scholarship to read Chemistry at the University of Oxford. Instead of praising Hajar Nur for her hard work, her dedication and her discipline, the religious bigots decided to attack her dress code.

They belittle her success, because she does not wear the tudung.

When she ignored the bigots, they attacked her on Facebook. They said that her dad will bear her sins.

Another person wanted the scholarship terms to include a mandatory wearing of the tudung. Will non-Malays be subject to the same dress code?

Someone called Mohd Khairudzaman Bahaudin said â€œAll right, congratulations, Allah hates His servants who do not cover their â€˜auratâ€™, we succeed not because weâ€™re cleverâ€.

One wonders if Mohd Khairudzaman has any views on corruption or the high rates of incest and drug taking, among Malays? Has he an opinion about the thousands of tudung clad girls who become pregnant every year and who abandon their babies on rubbish heaps, drains or are flushed down toilets?

Remember national gymnast Farah Ann Abdul Hadi? She was attacked in a similar fashion by the bigots.

Farah AnnÂ  won six medals, including two gold, at the recent South East Asian Games. Muslim zealots warned her that she was insulting Islam, by wearing leotards which showed off her “aurat” (her private parts). They failed to acknowledge her years of discipline, and training to achieve international acclaim.

Chemistry is a complex subject. To win a Bank Negara award and be ahead of the other contestants is no mean feat. To win a place at Oxford is another accomplishment. Somehow, Malay bigots feel these are less important than the dress code.

The Malay upbringing, and the environment in which they are brought up, are not healthy for Malay mental development and national integration. The conservative Malay world revolves around Malay matters and the after-life. Donning the tudung does not make one a better Muslim.

Bank Negara received 212 applications for the 2015 Kijang Emas Scholarship and Hajar Nur came out on top, after rigorous tests which included group and individual assessment, the SPM results and participation in sports and co-curricular activities.

These religious zealots should stop concentrating on rituals only.