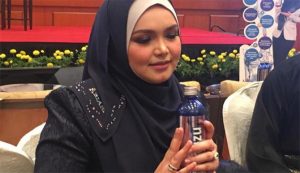 Some people love products which are endorsed by celebrities. Perfume, clothing and underwear are the more common items. Many people think, â€œIf a celebrity like Siti Nurhaliza uses the item, the product can be trustedâ€. Are they right or wrong?

When David Beckham endorsed a certain brand of Y-fronts, sales rocketed. Beckhamâ€™s six-pack, glistening and toned body, sent the women into a frenzy. Wives and girlfriends bought endless supplies of Y-fronts for their menfolk. Dreams are allowed.

Men are easier to handle. They simply wore what their women bought them, to avoid trouble.

In Malaysia, food or drink items are commonly endorsed by our celebrities, but we also have a special place for the Muslims. Anything which displays a few words from the hadith, becomes a runaway success.

Sales of zam-zam water, purportedly from a well in Mecca, have been sold to unsuspecting buyers in Malaysia, despite the ban by the Saudi authorities on its export for commercial purposes. Visitors to Mecca can only bring home small amounts, for personal consumption.

Zam-zam water is sacred to Muslims but discussing if it is safe to drink, is a sensitive subject. A BBC report showed that samples obtained from pilgrims had shown high levels of arsenic, a known carcinogen, nitrates and harmful bacteria. Muslims ignore warnings not to drink this chemical laden water, because they believe in this â€œholy waterâ€.

Some of us are easily fooled.

Visitors to Langkawi know the legend of Mahsuri, the princess who was wrongly accused and killed for committing adultery. She cursed the islands for seven generations, and after her death, the neighbouring Siamese recaptured Langkawi, and burnt down rice stocks and the paddy fields. Centuries later, locals claim that burnt rice grains resurface after heavy rain.

Few people know that one Kedah student alleged that during his school holidays, he would help some unscrupulous locals burn rice grains in a pan. He would scatter some of the burnt rice on the soil near Padang Matsirat, near Mahsuri’s tomb, and package the rest, to be sold to unsuspecting tourists.

In Malaysia, many waste money on products which have not been proven to have medicinal properties which they claim to give the buyer.

Held at an upmarket hotel, in Kuala Lumpur, a poster promoting â€œI-Mizuâ€ claimed that it could cure 150 types of illnesses and treat health problems like cancer, high cholesterol, diabetes, eczema, high blood pressure and obesity.

Who checks the product’s medicinal claims?

The USM vice-chancellor said that his university was eager to help entrepreneurs to provide a sound investment and promote research.

Consumers are not happy. They want to know which trials have proven that â€œI-Mizuâ€ water, can treat the various diseases found on the official USM facebook page.

Do the Ministries of Health, Education and Domestic Industry not worry that this product may be just another money-spinner which is used to prey upon peopleâ€™s weakness for a cure-all for their ill-health?

Remember the other wild claim by the Qu Puteh founder, Hasmiza Othman @ Seri Vida (DSV), who is the pink-clad, tiara-wearing, stylish and fashionable sponsor of the Kelantan football team.

She claimed that her special jerseys promoted slimming and could also whiten skin. Special threads incorporated into the jerseys, were claimed to help improve the blood circulation of the wearer, whilst his sweat, could burn away body fat. When the sweat evaporated, a fairer skin was produced.

In the west, products which claim to treat diseases, promote weight loss or whiten skin would be rigorously tested, to support the claims, and to see if they are safe to consume. In Malaysia, celebrity endorsed products appear to escape censure.

Why is the Ministry for Domestic Trade and Industry, failing to check and certify, if the products, are safe to consume and are not just placebos? Who would be held responsible if the product caused an adverse effect, ill-health or even death?