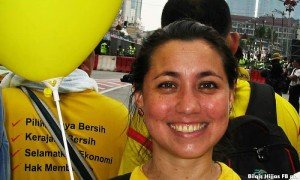 Some people are sensitive to latex, but who would have thought that Najib Abdul Razak would have an allergy to balloons, in particular, yellow ones?

The symptoms of people with a latex allergy are itching, wheezing and in severe cases, difficulty in breathing.

Najib’s allergy and over-sensitivity to yellow balloons caused his ego to deflate.

Worse still, it started a chain reaction in the people around him. The police, caught the woman who had dropped the balloons, and said she would be investigated for “intentional insult”.

I wonder how many “intentional insults” President Obama gets every time he appears on television.

How many “intentional insults” does the Queen of England” receive?

What is the total number of “intentional insults” most heads of state, or monarchs receive in the course of their duties, and do they order the police to arrest the people who “insulted” them?

Intentional or not, we are all “insulted” at some point, in our lives, but only the PM of Malaysia, and perhaps, the North Korean leader, have an over-sensitivity to insults.

On 31 Aug 2015, dance history teacher, Bilqis Hijjas released some â€œBersih 4â€ balloons with the words “Democracy”, “Free Media” and “Justice”, printed on them.

These landed close to Prime Minister Najib Razak, and a female companion, and the symptoms of his over-sensitivity to yellow balloons appeared.

The incident occurred at the Pavilion Mall and Bilqis has been charged for “insulting behaviour”.

Yesterday, the Attorney-General’s chambers refused to drop the charges against Bilqis.