Yin asks, “Will we see an end to Racism?” He urges PM Dr Mahathir to learn from Nelson Mandela. So will he? 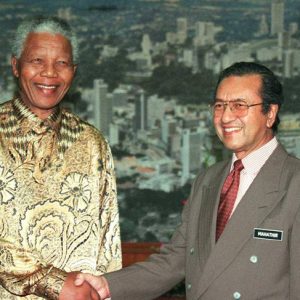 GE14 has come and gone. We have overthrown the 61-year-old government of UMNO-BN. Former PM, Najib Abdul Razak, who has been the focus of PH’s campaign is out and looks like he may be in very hot water.

But have we got the government we want? What do we want? Besides kicking Najib/UMNO out – and hopefully heralding a cleaner, more transparent and accountable government. What else?

All said and done, many of us refuse to recognise the core issue facing us; much less deal with it. The problem our country faces is RACISM – above corruption, above transparency and accountability. We need a government that governs for ALL Malaysians not just the majority. But that’s what we haven’t got and by the looks of things will not be getting with this government.

PM Dr Mahathir Mohamad has gone on record to insist that Bumiputraism remains. That the Malays still need to be ‘protected’ – after 61 years!

Is the weakness of one community the real problem? If it were so, surely affirmative action properly structured and implemented would have solved the problem. How much has bumiputraism done for the Malay masses relative to what it has conferred on the Malay elite? Mahathir has condemned the Malays for their ‘dependency mentality’ yet he wants to keep them dependent. It has nothing to do with affirmative action to protect the Malays and everything to do with exploiting race for political advantage – a ‘divide and rule’ strategy with which he is familiar. To put it bluntly Mahathir is a proponent of Ketuanan Melayu. Parti Pribumi Bersatu Malaysia’s (PPBM) constitution reflects the exclusivity of race just like UMNO’s.

Our problem is not the “weakness” of the Malays – however weakness is defined.  Our problem is that the Malay leaders want to play race politics – to scare the Malay masses that without them the Malay race would be lost – like the natives of America as Mahathir once warned the Malays.

Umno will not change

UMNO has refused to change despite the verdict of GE14. If anything the party has become even more racist – rejecting the more enlightened of its membership’s call for more inclusiveness.

As long as there is a racial divide you will have those who will use it to further their own cause. Anything can be given a racial twist like some prominent Malays who protested when the finance minister put out a statement in Mandarin. They screamed that it is an affront to the Malays. This is the action of chauvinists who twist any situation to suit their argument but not look at it from an objective and wider perspective.

Bumiputraism has reinforced the idea that it is the right of the Malays to be given special treatment above the provisions of Article 153 in our constitution.

This is further reinforced by the Biro Tata Negara which has twisted historical facts to suit its narrative that the Malays are the original people of this land and the others are ‘pendatangs’, even though most “Malays” came from Indonesia and as such is entitled to special privileges.

Although it is one of the stated goals of PH (to do away with the BTN) during its GE14campaign; it has gone back on its promise. Mahathir has refused; reinforcing his racist agenda.

I can’t remember Mahathir or any Malay leader say openly and unambiguously that ALL Malaysians Are Equal Citizens and that affirmative action will not be race based.  How a colour-blind policy will leave the Malays ‘unprotected’ I don’t know.

Our Malay politicians should take note of a video of the late Chief Minister of Sarawak, Adenan Satem speech that is making the rounds in cyberspace. Adenan has categorically condemned racism. Sarawak is a beacon for multiculturalism. Sarawak is a state with many lessons for Peninsula Malaysia.  They do not have the deep racial division we have in the West.English is widely used, yet it does not raise a storm like the Malay chauvinists marching to Putrajaya. Sarawakians are not confused by the use of “Allah”. They understand that to progress we have to have English. That using another language in addition to Bahasa is not attacking the position of the Malays. And using an Arabic word for God is not attacking Islam.

Will our leaders tackle the issue of race or will it remain the elephant in the room for another 61 years?

We cannot afford more racial discrimination and division if Malaysia is to reach its full potential which only a nation united can do.

Mahathir should learn from the great man. To seek reconciliation and be the healer of past wounds.To work for unity instead of dividing the people for political advantage.To work for social justice for All Malaysians and not just one race.To be the father of Bangsa Malaysia.

He can be all this but he has refused. Shame on him.