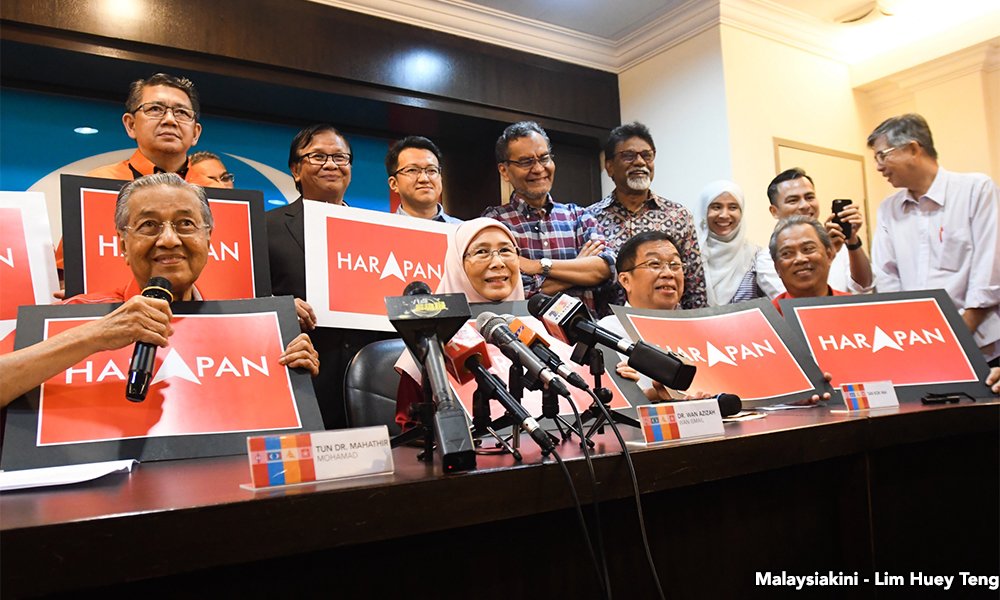 From the Pakatan Harapan lineup it would seem that what I wrote about Mahathir Mohamad being PM (“Flying Kites”) is about to come true. It may not be script perfect but the plot is the same…

Lim Kit Siang softens the public into accepting Mahathir as PM (“Mahathir made Malaysians stand tall”). Then low and behold when he is unveiled we are not so shocked.

Anwar’s “Leader” title is just a sham. He is in jail. I ask again, will PM Mahathir work for a pardon for Anwar Ibrahim so that he can become PM? Once he has the throne he will not abdicate . . . not until his son is made the crown prince. Anwar is a forgotten man. His DAP and Amanah comrades have sold him out. His own party has decided that he is dispensable . . . “for the greater good” isn’t that what  they usually say?

Mukhriz Mahathir is VP – a position from where his father will launch his political career.

Muhyiddin Yassin is only a bit part player – he will be written out of the story at a convenient time. Anyway he is no big loss.

This is working out to be the scenario I painted.

We have to ask this new coalition what exactly does it stand for?

It is a coalition of one bitter old man who wants to get rid of Najib whatever it takes and three parties of desperate politicians who see this as their last chance to take power.

Does it stand for:-

1. A Malaysian Malaysia as DAP has steadfastly clung on to for decades?

2. Does it stand for no Corruption – having a truly independent MACC?

3. Accountability and Transparency – Petronas must show accounts and it must be taken from the PM.

4. Will it replace Bumiputraism with a non-racial affirmative action policy which truly benefits the have-nots, and not the powerful and privileged (UMNOputras and cronies)

5. Will it bring back Local Government Elections?

Ask yourself this: Will the person who has so deeply polarized the country racially now bring them together? Is the Father of Cronynomics going to now level the playing field? Should we allow the person who according to Barry Wain, in his book (Malaysian Maverick) lost the country heaps, hold the purse strings?

Kicking Najib out is not enough for Malaysians to vote for PH.

And do DAP,Amanah and PKR think Mahathir will deliver the Malay votes?

The religious will vote for PAS, many will vote for UMNO because of its patronage if nothing else (Malaysians are easily bought) and some will vote for Najib because they have not forgiven Mahathir for all the bad things he has done.

Mahathir will lose as many Malay votes as Kit Siang and the others think he will deliver.

Leaving aside the above. What does the lineup tell us?

No young Malaysians who do not have the baggage of this crowd – young leaders with vision and the courage to make changes. There should be young blood in the lineup who will take over the reins in time – they are the future.

Old dogs cannot learn new tricks, a leopard cannot change its spots may sound clichéd but nevertheless it describes the line up.

Even before GE-14 the hopes of Malaysians have been dashed.

In the words of Theresa May “Nothing has changed!”

The new boss is going to be the same as the old boss.

Don’t say I didn’t tell you.