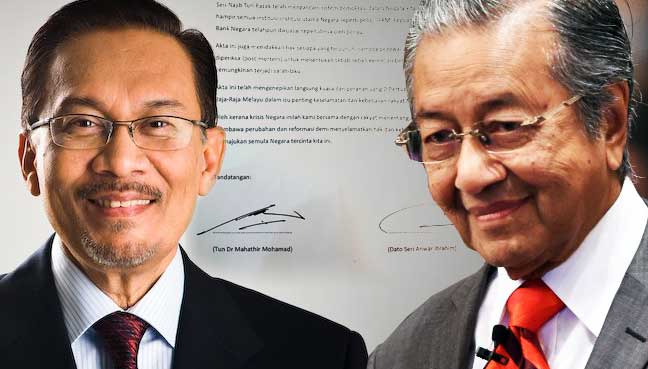 In politics, nothing happens by chance.

The recent comments by two leaders of DAP is a case in point.

First Zaid, the ex-minister for law in the BN government and now an important voice in DAP, suggested that Mahathir Mohammed should be prime minister.

Then Lim Kit Siang, the elder statesman of the party, lauds Mahathir for “making Malaysians proud”. He conveniently brushed aside Mahathir’s sins with the one line that he has not forgotten about the wrongs done by the ex- prime minister. It may be that he has not forgotten, but it certainly seems that Kit Siang has forgiven Mahathir. Not millions of Malaysians, I don’t think.

There was no murmur of objection from Amanah. And although some PKR members picketed for Anwar Ibrahim to be prime minister, leaders of the party were strangely quiet, or at least did not make a fuss about the call for Mahathir to be prime minister.

There were even suggestions that Mahathir could be the “interim prime minister”.  A compromise? Perhaps,  a move to hold the opposition coalition together? Maybe a face-saver for Anwar who has been all but forgotten in the quest for power? Looks like it.

All this is too much of a coincidence – as they say, “no smoke without fire”.

Both Zaid and Kit Siang are flying kites – testing the political wind (see what the public reaction is); preparing the public for the time when Pakatan Harapan announces Mahathir as the “interim prime minister” should they win GE14.

This is a bad idea!

Mahathir is damaged goods the public will not buy, even if Zaid thinks otherwise. He has has cost the nation too much.  His gambles and ego projects – Cornering the tin market, Forex dealings, Proton and Petronas Twin Tower. He caused irreparable damage to our judiciary; entrenched institutional racism in the country and started the slide in our educational standards. He cannot be trusted to run the country again – not even for a day.

How long is “interim”? Does it mean Mahathir becomes prime minister until Anwar can take office? Or until someone suitable is ready to take over? When will that be?

My guess is that the length of Mahathir’s “interim prime ministership” will be until his son is ready to take over – that’s how long ‘interim” is.

Once Mahathir has his feet under the desk, it will be almost impossible to shift him. As prime minister he calls the shots. In Westminster tradition, the cabinet is his – he does the hiring and firing. And if he fixed Anwar, what makes you think he will not fix anyone who dares challenge him?

Pakatan Harapan leaders may think that Mahathir is an asset to the Opposition; but many think he is a liability. Already we have seen members of DAP resign from the party on their leaders’ volte-face concerning the ex-prime minister.

Many voters feel likewise – you can’t for decades curse the man and suddenly embrace him like a long lost brother, it reeks of desperation.  Are we so bankrupt of talent that we have to accept “soiled goods”? What little remains of the drawing power of Mahathir among the Malays is overrated. The truth is the Opposition does not need Mahathir to win GE14, Najib is doing a good job to win it for the Opposition.

But if he wants to contribute let him do so without giving him the reins of power – even on an “interim” basis.

Mahathir is the best political operator this country has ever produced – bar none! This he would have demonstrated again if his partners in Pakatan Harapan accept him as “interim prime minister”.

I don’t think Malaysians will, even when Anwar Ibrahim has declared that he will not accept to be the next prime minister.

If it’s anyone but Najib/UMNO, then double that for Mahathir.

The views expressed are those of the contributor