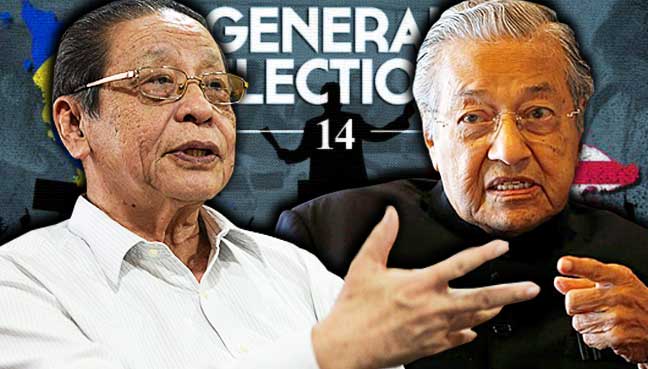 According to the Star (4/12/17) Pakatan Harapan (PH) has decided that Mahathir will be the Prime Minister if PH wins.

Why am I not surprised? Lim Kit Siang has been saying what a jolly good fellow Mahathir is for a long time now.

So why are thousands still not convinced – especially young Malaysians?

According to several polls 1. Young Malaysians do not trust politicians  2. Are not interested in politics (probably a consequence of 1).  3. Apparently over 4 million have not registered to vote – a result of 1 and 2?

Is it a wonder that young Malaysians have ‘given up’ on politicians and politics, when there is not an ounce of integrity in the lot of them put together.  How does DAP explain its stand vis a vis Mahathir and PPBM? How does ‘Malaysian Malaysia’ square with ‘Ketuanan Melayu’? How does race-free policies square with racial policies? And further down the line, how does DAP’s stand that Mahathir will be investigated if he has been corrupt. If Mahathir becomes PM will this be done? Of course not.

In short, Lim Kit Siang and DAP has sold out its principles.

I can hear the cry “Be Pragmatic!”, meaning we are allowed to do anything to achieve our goals. In other words, the ends justifies the means or as a disillusioned wit has graffitied, “Machiavelli  Rules OK!”.

No wonder our young do not trust politicians and are not interested in politics. How can you trust someone who says one thing today and do the opposite tomorrow? It augurs well for the future that young Malaysians have integrity and principles.

It is worth noting that in a vote among the Youth Wing (as reported in the Star) the majority did not vote for Mahathir.

I have long argued that it is not an improvement if you replace like with like. No point putting in another (in this case known) racist to replace the present racist. Or someone who is easy with our money with someone who is just as cavalier.

“Ah, but this time there is DAP, PKR and Amanah to check on PPBM” you say. Did not we say the same about MCA, MIC and Gerakan?

I am sure many of them started out with good intentions. In the end they sold us out again and again.

Holding office has a corrupting effect on the office-holders. And if these people were prepared to lose their principles even before holding office, how much more easy it would be to rationalise whatever they do to stay in office?

Out of this unholy mess the only person who has come up with his credibility intact in Tian Chua. He would not accept a decision made by a few in a back room pow wow.

Is Mahathir really the lesser of two evils? Or is he the original evil?