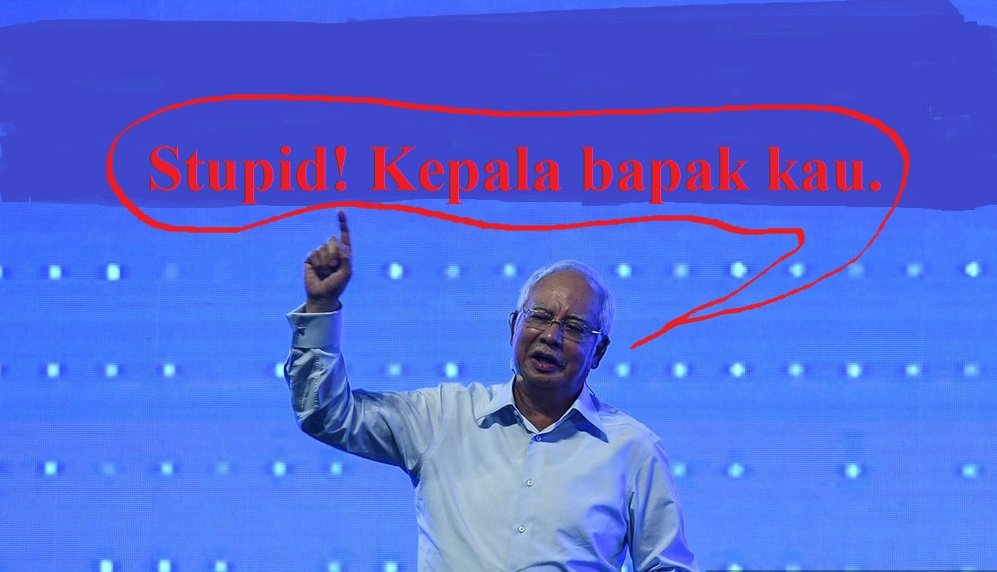 Who would have thought that the leader of a country would use coarse and vulgar language at a General Assembly, especially when he knew he would be filmed and his remarks reported in the newspapers.

The explanation is simple.

When Najib Abdul Razak said “Kepala bapak kau“, at the 64th MCA annual general assembly, it could have meant any of the following.

He was just being rude.

He was reacting to the remarks someone else made.

He had lost his marbles and did not care about the image he projected.

Perhaps, all of the above.

Nothing anyone says, not even the PM, can justify the use of the words, “Kepala bapak kau”. In Malay households, the use of these words are verboten.

One friend, who used this expression was severely reprimanded by his mother and told to wash his mouth out with “Chlorox”. That person was not a child or a wily teenager. He was a forty-year-old married man with two children, and he had scolded his maid for leaving a tap dripping. His own mother heard him, and sent him packing. Those words are not just rude, they are  also a sign of a bad upbringing. No wonder, his mother told him off. It reflected on her, too.

What was Najib Abdul Razak thinking when he used the three words, “Kepala bapak kau”,  at the public event? Was it for effect?

From the laughing faces and hoots of approval, Najib appeared to be playing to the crowd. This is shocking, but not as shocking as the MCA leadership’s apparent lack of knowledge of the nuances of the Malay languange.

Najib’s words were coarse and should never be used by a prime minister. He sets a poor example and in other parts of the civilised world, a leader who uttered these words would be fighting for his political survival. Our MPs appear to think that sexist, ageist, and crude remarks are a legitimate part of a politician’s repertoire.

Malaysia being “lelong-ed” to the People’s Republic of China

The remarks, “Kepala bapak kau” were made when Najib denied that his government had sold off the sovereignty of the nation, to the People’s Republic of China.

Najib was enraged by the claim, made by the Opposition, that locals were not allowed to enter the Kuantan Industrial Park land, in Gebeng.

A special report, by Malaysiakini, said that  the local representative, Teruntum assemblyman, Sim Chon Siang, had been prevented from visiting the site, despite a written request. The project forms part of the Malaysia-China Kuantan Industrial Park (MCKIP), and Sim’s constituents had complained about the lack of transparency, and that mainly foreign workers and foreign construction material were used at the site.

The entire project site is surrounded by an eight feet high wall, most of which is topped with steel spikes. Satellite images show that the protective wall is about nine kilometres long. The main, and only, entrance is guarded by people in white uniforms from a local private security firm. Additional security is provided by guards from China, who wear black uniforms.

Najib is scared of a 93-year-old man

Perhaps, Najib should understand the concerns of the locals. The Forest City is reclaimed land, but the target customers are those with money. Locals cannot afford the sort of houses which Forest City offers. Moreover, the mainly foreign owners of Forest City will enjoy the special perks, and tax-free status, which will be denied to the locals.

The homes in Forest City may be sold on a 99-year old lease to wealthy foreigners, but for many locals, this is as good as providing them with a freehold. Many of the local people, who own tiny plots are still unable to convert them into freehold land.

Najib should stop using crudity to detract from the main concerns which the locals have about these two areas. Is it any wonder that many people, including the Opposition, have claimed that Malaysian sovereignty has been sold-off?