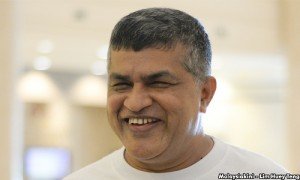 The report below, was filed on 27 JanuaryÂ  2015.
Among the highlights was that Zunar was due to give a lecture at The University of Oxford the following day, on 28 January.
On 28 January, Zunar’s office was raided and 149 books were seized. They were both the English and Malay copies of the books, “Conspiracy to imprison Anwar” and Pirates of the Carry BN.”
Zunar was in London, and just about to leave for Oxford when he received a phone call about the raid.

So, was the raid a coincidence??? Or was it a calculated move to punish Zunar, especially as it was reported that he wasÂ  due to address both Oxford and Cambridge* universities?

Â
= ============
Zunar: Drawing cartoons is a crime in Malaysia (A report on Zunar’s program the day before he went to Oxford)
It is not surprising that Zunar, Malaysiaâ€™s most prolific and controversial political cartoonist, is more widely known abroad than in his own homeland.

â€œI have given exhibitions around the world, but I have not been allowed to hold one in Malaysia.

â€œMy work is banned in Malaysia because it is considered offensive by the government, Prime Minister Najib Abdul Razak, and his wife – the self-styled First Lady of Malaysia (FLOM). My cartoons often depict the PM and FLOM, (as well as) their abuse of power and corruption,â€ he said.

Zunar was in Gothenburg, Sweden to participate in the â€˜Sketch Freedom 2nd International Cartoon Expoâ€™, which was held in collaboration with the regional state archives in Gothenburg and the Gothenburg Film Festival. The event was sponsored by the museum, Le MÃ©morial de Caen, which invited 25 international cartoonists.

The cartoonist then flew to London last Saturday to address the Monsoons Book Club, and also entertain members of the Malay community who had come from London and Manchester, at a talk-cum-sketching session.

At the Dragon Hall last Sunday, Zunar entertained around 65 Malaysians – who work and study in London – as he sketched his way through a talk, describing the Malaysian political scene.

He told the audience, â€œMalaysia is full of world records. Amongst the best records is that we have the â€˜best educationâ€™ and â€˜best police forceâ€™ in the world, but the one record that it refuses to tell the world is that one political party has governed us for the past 58 years.â€

Zunar said that – on an American university lecture circuit – he was asked why Malaysians had allowed a party to rule for 58 years. He said that this question helped strengthened his resolve to fight for change, stressing that â€œthere is no turning backâ€.

Zunar has been investigated twice under the Sedition Act – and also under the Printing Presses and Publications Act 1984 and the Penal Code – for drawing cartoons.

â€œ… In Malaysia, the government has classified the drawing of cartoons as a crime,â€ he noted.

He said that he has been detained a few times, his offices raided and his staff arrested. He has been in and out of the courts, trying to challenge his detention and the ban on his work. Printers are warned not to print his books, and bookshops and vendors, have been given similar warnings.

One member of the audience pointed out, â€œIf only the government spent the (same) amount of time and resources on every crime, Malaysians would feel safe.â€

The government is aware that they cannot break Zunarâ€™s will, so they have begun to target the company which sells his books, and demandÂ  for the details of online buyers. They are in breach of the Data Protection Act, but in Malaysia – as we know – the law can be bent to suit the authorities.

Before he returns to Malaysia, Zunar will address Malaysian students and members of academia at the University of Oxford. His lecture will be held on Jan 27, at 4.30pm in the Margaret Thatcher Centre, Somerville College, Oxford.

He has also been invited to give a lecture at the University of Cambridge, before he leaves for Kuala Lumpur.

Zunar noted that he is more welcome at American and English universities, and ironically, he has been banned from entering many Malaysian universities.

â€œMost Malaysian universities do not invite me to address their students,â€ he said.

It was previously reported that the initiative of lecturers at Universiti Sains Malaysia and Univerisiti Malaysia Sarawak – to request Zunar to make presentations – has landed them in hot soup, and he admitted that the lecturers are now encountering problems with the university administration.

â€œIn other countries, the highest court in the land makes judgments on important matters. In Malaysia, the Federal Court passes judgment on cartoon books!â€

To a question that he does not target NGOs or other Malaysian opposition leaders, he replied: â€œThe point of drawing the leader of Malaysia and his wife – to criticise them, make a mockery of them and expose their wrong-doings – is because they are the decision-makers of the country. They control the money. They abuse power.â€

He is appalled by the attitude of some of the rakyat towards corruption, citing the first Penang bridge (built during the time of the â€˜Look Eastâ€™ policy of former prime minister Dr Mahathir Mohamad), the ever increasing payment of highway tolls and similar corrupt practices.

â€œThese people claim that the corruption afflicting the country has nothing to do with them, and that their main concern is simply to focus on their jobs. They fail to realise that we are the ones who are paying for the corruption.

â€œIt is important for us not to remain neutral. If you keep quiet, if you remain neutral and do not make a stand, you are only supporting the Umno Baru regime in Malaysia,â€ Zunar stressed.

â€œDo what you know best to fight the regime. Write, draw, email and highlight to your friends the reality of the country. If you agree to fight, you must do something. My mission is to â€˜fight through cartoons’. Donâ€™t be neutral, even my pen has a stand,â€ he quipped.

Zunar laughed and added, â€œThe government gave me a compliment when they said that reading and laughing at my cartoons has been designated as an incitement to national security.â€

First published in Malaysiakini 27 Jan 2015, 12:00 pm
Read more: https://www.malaysiakini.com/news/287471#ixzz3q6XDAB3v
Photo credits Malaysiakini
(*Note. The Cambridge trip which the organisers (Monsoons Book Club), of his Oxbridge lecture circuit, had originally tried to arrange, had to be postponed because of time constraints, finally took place last Monday 26 October.
The report of the Cambridge trip is on another article.)
Rebuilding Malaysia