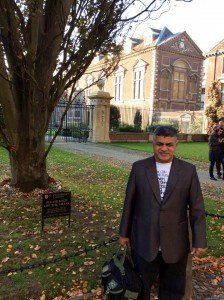 If Zunar was fearful for his future, he did not show it. If he was anxious for his freedom, he kept it to himself. At The University of Cambridge, Zunar captivated the audience with his wit, his humour and his drawing skills. The crowd was in stitches, and a few of his remarks may have increased the number of his sedition charges.

Undaunted by the spectre of a looming trial for sedition, Zunar is savouring his freedom, racking up air miles, before flying to Malaysia to face a possible travel ban and imprisonment.

As he watched the punts on the River Cam, and peered through the gates at Tunku Abdul Rahman’s alma mater, St Catharine’s College, one would have thought him just another tourist. Few would have guessed that he was being hounded by both the IGP and the Malaysian government.(Pic shows Zunar outside Tunku’s alma mater)

On Monday, Oct 26, Malaysia’s most prolific satirical cartoonist, delivered a speech to The South East Asia Forum, at The University of Cambridge. The students had a rousing welcome for Zunar, as he entered Newnham College.

An organising committee member, Karis Wong said, “Zunar, you are probably the first Malaysian cartoonist to give a talk at both Oxford and Cambridge.”

The talk started with the documentary, “Fight Through Cartoons”, made by the celebrated producer/director Mic Hoo. By the time, Zunar finished, the audience was armed with a steely determination to fight oppression. Zunar mocked Najib Razakâ€™s governance and he said, “Laughter is the best form of protest, in Malaysia.”

His cartoons, which are critical of the government, have often landed Zunar in trouble. He talked about his relentless persecution, the worsening situation in Malaysia and he wondered if an anti-laughter law will be passed, under which Malaysians would have to apply for a permit to laugh.

In his earlier work, he suggested that former PM Dr Mahathir Mohamad is the Malaysian version of Pinocchio. He said, “Don’t award me with a Datuk, not even a Tan Sri. Just give me a Tun, as in “kar-tun”. We have Tun Mahathir and Tun Abdullah Badawi. Aren’t they also kar-tuns?”

He said that his parents had dissuaded him from being a cartoonist, because it is a “job that does not pay”. He entered the science stream and reluctantly worked as a laboratory technician, until he started to lose his “sense of calculation.” He then started to draw cartoons, full time.

In the topsy turvy world of Kartun Land, “the accused can instruct the police to open an investigation on the whistleblower”.

One undergraduate said, “Zunar’s talk gave a good overview of Malaysian issues. The questions were pertinent.”

A PhD student said, “Zunar advocated change, but who will take over?”

A student from KL said, “I admire his spirit. I came to hear about his charges and I like his quote, “Responsibility above fear”. I admire his courage despite the challenges that he faces.”

Another said, “I think Malaysians are almost there. The RM2.6 billion is scandalous. We must raise the same issues, and not allow the leaders to escape scot free, in GE14.”

A student leader told Zunar, “We enjoyed your talk.Â Â Thank You.”

Zunar later confided, “This is one of the best talks I have attended. I think the students were courageous. I rate this talk, nine out of ten!”, treasuring his present from the students.

Other photos Credit to TheAntDaily)