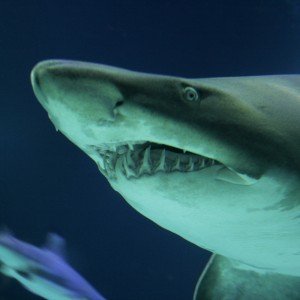 A smiling shark is still a shark.

Politicians in the Umno-Baru government act like sharks. Just before the general election, the leaders will come with gifts of rice, milo and babyâ€™s milk. We are grateful and say that the government is so kind, although we only see the leaders once every five years.

Please do not be easily deceived. Please donâ€™t be made stupid by the government!

Who paid for the rice, milo and milk? The answer is we did, the taxpayer!

The government purchased these things from the crony. The Milo costs RM3 per tin, but the crony charges the government a â€œcheap priceâ€ of RM30 per tin.

The government does not care about the cost because it is not paying for the items. The one who bears the cost is the taxpayer.

Have you met a poor crony?

One story about the BR1M.

The section of society which is qualified to receive the RM500 BR1M payment loves the government. They are not aware that the government gave them RM500, but collects thousands of ringgits in return. Why should the government care if people are poor or not?

Taxes are up, the cost of everyday goods has increased, the cost of living has shot up and the best is the implementation of the GST, which is the tax on all users.

The reaction of a part of the rakyat, which loves Umno-Baru-BN, was to claim that the GST is good because it will benefit the rakyat.

The moral of this story: Donâ€™t trust the smiling shark, because it is still a shark. It will swallow you whole. What does it care? You are its food.