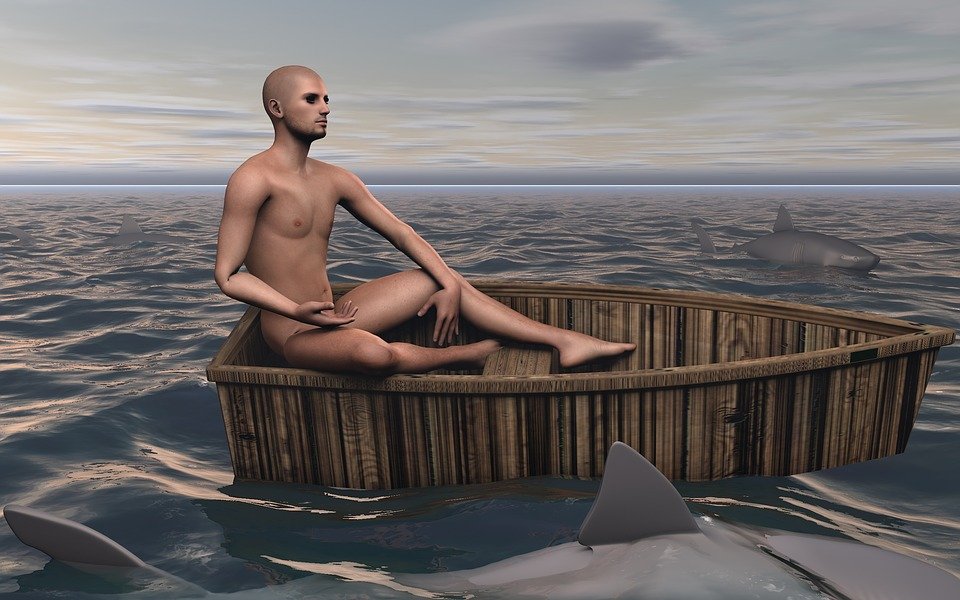 Can you exercise your imagination?

Somewhere in the South China Sea, Najib is having a well deserved rest on the Equanimity, (Jho Low’s luxury yacht). He is having a break from Putrajaya. He is sleeping in the stateroom, whilst his body guards are on deck, watching the small uninhabited islands, for signs of pirate activity.

All of a sudden, two calamities occurred. The boat tore its hull on a coral reef and the skipper received a severe weather warning.

The lifeboat was launched but in the confusion to abandon ship, Najib’s bodyguards (there were so many of them) had forgotten to bundle the PM onto the lifeboat. Everyone took off. The PM woke up, to find that he had slept through the storm and was still on the king-size waterbed, which had floated onto the beach.

Unbeknown to Najib, the Opposition leader, Anwar Ibrahim, was in a fishing boat, some kilometres away. He was visiting fishing villages, canvassing for rural votes, when he was also caught in the freak storm.

As it was only a poor fisherman’s boat, all Anwar had in the way of a life preserver was a lorry inner-tube which he quickly jumped into. He, too, was washed-up onto the island, with Najib.

What do the men do? Do they retreat to opposite ends and sulk? Do they learn to work as a team, and try to be saved?

Anwar has knowledge – he spent most of his time in prison, hoovering information from a wide variety of books, one of which was the SAS Survival Handbook.

He knows which roots, plants, animals and shellfish are safe to eat. He knows which are poisonous. He also knows how to start a fire, construct shelters and how to find fresh water. He has a Swiss army knife in his pocket.

The only problem is his bad back. He will need someone to carry the firewood, and although he can build traps, he will still need help to carry the game.

Lost without the Big “R”

Najib has no back problems and he is clueless about finding food, hunting, making traps or building fires.

He has the strength but will he work together with Anwar to get nourishment, help erect a shelter and build a bonfire, to signal for rescue?

If both men want to survive, they need to work together. What do you think will happen?

The jewellery box and suitcase

The PM searches his pocket for his smartphone, but it is waterlogged and is only good for stunning the fish that are caught for their meals. Deep in his pocket, he finds a jewellery box with a massive ring. A present for his wife.

He chucks the ring away as it serves no useful purpose. He wishes he had a cheap RM2 magnifying glass to build a fire, which will keep them warm at night, keep predators at bay and attract the attention of passing ships.

A suitcase washes-up on the beach. It is recognisable as it bears the name of the yacht. The two men prise it open and it is full of money. Millions of ringgit.

Najib suddenly realises that money is useless on the island. He cannot say, “You help me, I help you.” He appreciates the real value of money because later that night, both he and Anwar burn the money to keep warm and repel insects.

Just before they settle down for the night, they talk under the star-studded night-sky, like two old friends who have just renewed their acquaintance. They joke. They laugh. They reminisce.

Najib has no qualms sleeping beside Anwar on the water bed. He knows that the sodomy charge was just a political game, to keep him in power. There was never any sodomy.

Away from the prying public, an understanding has been reached. Away from the political and domestic life, Najib is quite talkative.

The two men exist happily for a few days, until a woman washes ashore. She is the only survivor of her shipwrecked boat.

The woman shows these two men how to dry surplus fish, for a rainy day. How to keep the shelter clean. How to forage for food.  She organises a rota, to watch out for passing ships and aeroplanes.

The two men are very happy to take orders from a woman. For the first time ever, Najib discovers that women are good at home economics and are disciplined.  He wonders why he has been surrounded by the wrong sort of women thus far.

All is fine until one day, another man is found clinging to some floating debris.

They turn him over and recoil in horror, when they see it is the Perak mufti.

His first words on regaining consciousness are, “The woman must be exiled to another part of the island. She will lead us into temptation. She is evil.”

He splutters, “Take off your football jerseys. They have the sign of the cross. Don’t you want to go to heaven?”

Silently and reluctantly, both Najib and Anwar take the jerseys off. They know that without any covering for their skin, they will burn under the hot sun and freeze at night.

The woman is banished to the far side of the island, and the two men become gloomy. Only the mufti is ecstatic, because he can show God, that he still has a congregation to lead, in prayer. All two of them.

The mufti tells the two men, “As no royalty is present, I am the most important man on this island, unless…”

Anwar and Najib look at one another and say in unison, “Unless what?”

The mufti said, “Just before I passed-out on the floating log, I saw Mahathir clinging onto a lifebuoy. He may wash-up on the beach very soon.”

They jumped when they heard a cry for help and trained their eyes on the water. A head is bobbing up and down and waving at them. The mufti was right…

What do you think will happen next?

Are YOU primed for change?

We have seen how two adversaries can teamwork together, for one goal – survival. We see that in reality, they do not mind taking orders from a woman.

Without an audience (the rakyat), the people who wield power, can revert to their true human selves.

We also see that when they are stripped down to their basics, the material things in life, like the diamond ring, the smartphone, or the wads of cash are useless. Being shipwrecked has shown them the true value of things.

We see that the presence of the cleric destroys harmony. He was more concerned about going to heaven. He has no clue about the practicalities of life.

Can you write the next installment of “Three men on an Island”? Include Mahathir and incorporate positive change. Or will you also revert to type?